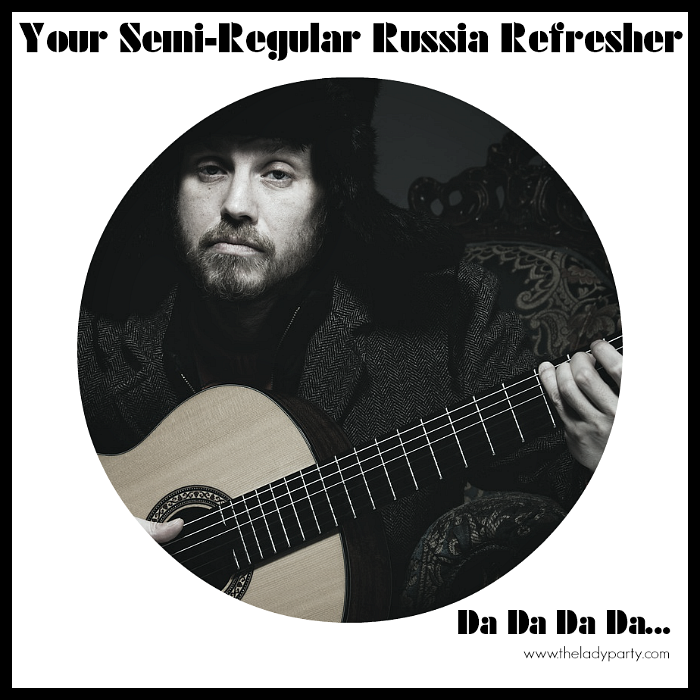 Well, folks, it's time for a refresher on the never ending vodka soaked #worstcircusever straight from the Kremlin! That's right, it's our latest installment in Russia Russia Russia, the story that is so painfully obvious it isn't even bothering to lurk in the shadows in a trench coat and a funny accent. Nope, this Boris Badenov mother fucker shut your mouth is straight up standing in the sunlight with arms open wide begging to be noticed.

Well, ya got trouble, my friend, right here, I say, trouble right here in River City, brought to you by the smarmiest snake oil salesman and former reality TV star and failed businessman who played a successful businessman on TV to slither his way into the Oval Office, Don the Con! That's right, step right up to see the orange faced, turban haired, genitalia pawing man with the golden toilet! Revel at his early morning #twitterontheshitter rants, be dazzled by his "unpresidented" (sic) ability to deny, deflect, distract with the verbal dexterity of a three year old, stare gape mouthed and amazed while he merrily golfs and insults his way through the bulk of his five hour and fifteen minute work days, and hang your head in mourning as he destroys our republic all in service to his puppet masters, Vlad the Bad and the Russian Oligarchs.

Coming soon to the USA! The coup is almost complete! Take off your red caps and toss on your fuzzy hats, folks!

It's all they want to say to you.

Sure, we've talked about it ad nauseum, and yet, most people don't have a whisper of a clue how deep the Borscht runs so we're bringing you yet another quick refresher. For your education and edification, here is the list of the members of the Trump transition team and White House with significant and traceable ties to Russia. First and foremost, we have to give special dispensation to the Gomer Pyle of Gazprom, Carter Page. A man so goofy and idiotic the Russian spies who were manipulating him felt he was too much of an "idiot" to be useful. Or was he crazy like a fox?

The Washington Post has organized all of these people and their various connections and contacts with Russia in a manner so effective we highly recommend your review.

(We've placed stars next to those who have been indicted thus far in the Russia Probe.)

...and last but surely not least, takes deep breath, the seven times bankrupt twice divorced trust fund squandering deadbeat thin skinned narcissistic draft dodging sexually abusive cheating lying sexist racist xenophobic Donald J. Trump who, unable to get loans in the US, likely found financing from the Russian Oligarchs. Not to mention his financial ties to Russia going all the way back to 1987.

We're all paying the interest on those loans.

Then there's the interesting matter of monies potentially coming from Russian Oligarchs into the Trump campaign coffers through the NRA.

But the memo! Yes, the cherry picked misleading possibly White House generated memo presented by favored lackey and midnight rider Devin Nunes. This is the second time Nunes, who recused and then somehow unrecused himself from the Russia investigation, has shown up with a suspiciously doctored "damning piece of evidence" with much pomp and circumstance and absolutely no shame.

One last little nugget of interest before the shit hits the fan today, Donny Jr. tweeted yesterday that Andrew McCabe was fired. Wait, what? McCabe retired, didn't he? Or did he?

I highly recommend reading the transcripts from the Russia hearings from Glenn Simpson of Fusion GPS. Here is the first, and the second. The report from the Committee on Foreign Relations in the Senate is also enlightening...and frightening.

Also take a peek at Dirty Money from Netflix, The Confidence Man episode is very enlightening.

It looks mighty dark at the moment, yet all hope is not yet lost. We must continue to resist and hold out hope that the truth will out. Meanwhile, this blogger is waiting with bated breath for the delicious moment when we can finally tell The Orange Menace, "YOU'RE FIRED!"

Read more from this series:
Your Refresher Course on the Worst Circus Ever
It's Russia, Stupid
Wake Up and Smell the Borscht
Russia Russia Russia
Election 2016: From Russia with Love