Ending the Code of Silence Around Abuse 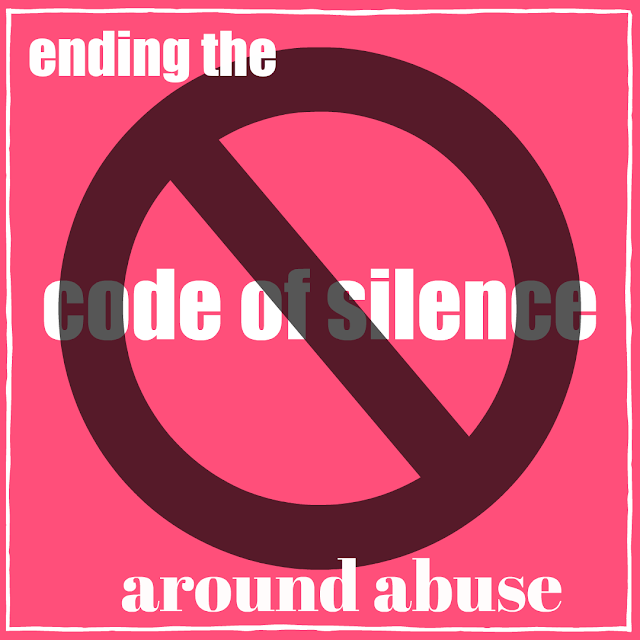 I've been thinking about abuse and how it thrives. It's nuanced, layered, and insidious. There's an act, or a series of acts, and they're often preceded by a series of smaller acts. Then there's the secrecy surrounding the acts, and the shaming that follows. The pressure on the victim to maintain silence is often coerced through threat, or bribery, or creating a sense of partnership in the act, of complicity, and that leads to clouding of the waters and uncertainty in how to proceed.

There is a Code of Silence Around Abuse and it's most surprising how often those who are not involved in the act (but are aware of the existence of the act) participate in concealing it or altering perception of it to turn something ugly into something less so. This happens a lot in families where the fear of the outside world discovering the act and then judging the family becomes greater than the desire to protect the victim. It also happens in social groups, churches, sports teams, schools, political parties, and work places, where the importance of maintaining the appearance of propriety supersedes the importance of protecting the victims. The result of this fear allows abusers to continue to have access to victims and continue to abuse freely and without reproach.

This is a systemic issue in our society when it comes to abusers. We would rather pretend these ugly things do not exist than face the truth that they do and they are pervasive. Speak out and you may find people ignore you, attack you, or disbelieve you. Sweep that under the carpet, dear, it's nasty. Other people are surprisingly willing to participate in silencing, shaming, and blaming. I see it over and over again and every time I see people participating, I'm shocked. Confront them and they'll balk, insisting that the victims are complicit, liars, and somehow less worthy.

Well, if they didn't dress like that or say that or go there or do this, then...

I'm also surprised when other people participate in abuse through enabling and excuse making. They'll support charismatic, powerful, popular friends or colleagues, assist them in procuring and silencing victims. They'll explain away concerns, they can't help it, they didn't mean it, you don't understand, this is simply how they are and they're above reproach. You're overreacting, you misinterpreted, it was a bad day. They'll compartmentalize the abusive aspects of a person if they're a 'genuis.' But they're an exceptional actor, director, businessman, sports figure, musician, writer, politician...they're not like other people.

We are not going to progress on the issue of abuse until we begin to face the issue of our cultural complicity. As long as people are willing to attack victims and defend abusers, abuse will continue to thrive. The silencing, blame shifting, excuse making, and enabling must end. We have to consider about the ways in which we are all accountable, the manner in which we are participants in the Code of Silence. Did we say enough and do enough to support and protect the victims? Were we willing to risk our connections, our job, or our social or professional standing to do the right thing? Then we have to consider the times we struggled to disbelieve a victim especially when the person being charged with abusive behavior was a powerful, talented, popular person.

Abuse won't end until we shine a big, bright, unrelenting spotlight on the abusers and the people who protect them. Shame must be replaced with a relentless desire for truth. Victims should be embraced, not ridiculed. That includes victims of those who would lie about being abused for attention, because that is also abusive behavior. No one is above reproach or above the law. What other people think about your organization or family or peer group is not an excuse for protecting abusers. We must demand more from each other and ourselves and strive for a world in which abuse is no longer tolerated.