Asking for More: Valuing Your Creativity 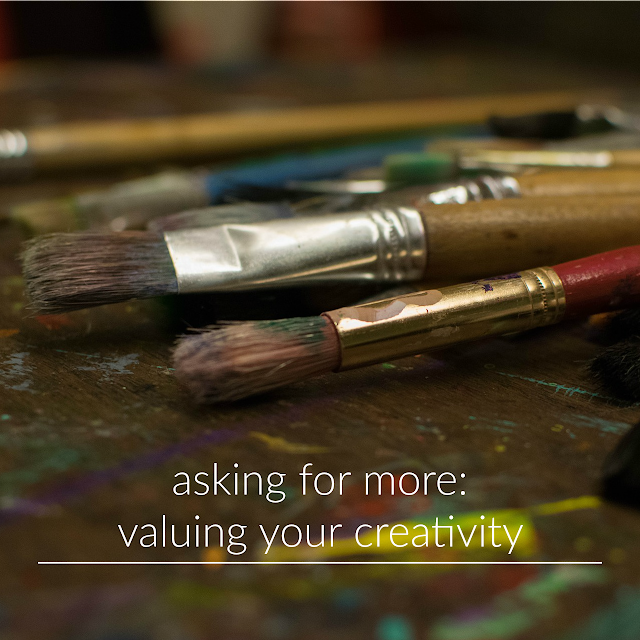 There is an insidious undercurrent that is rarely exposed. It's a form of abusive behavior that is casually accepted or roundly ignored. I'm talking about the way that creatives are treated in professional settings. It's sometimes subtle and sometimes blatant, and regardless it's unacceptable. I've written about this before, and I'm likely to write about it again. It's time creatives stopped allowing it. There is a perception that creative people are lucky, lazy, unprofessional, and undeserving of being treated in a businesslike manner. The attitude is that creativity is so much fun, ahem, you should be happy to get any work at all. Add to that the endless offers of working for glitter, compliments, exposure, connections, and heavily discounted fees, creatives are often forced back into the job market to survive. Creatives can't pay our bills with IOUs from vendors, we can't pay the rent with a bucket of glitter, we can't feed our families with compliments, and exposure is rarely a tangible benefit. We can't get it for you yesterday and wait for payment until next year...or never...as is often the case.

In my many years as a professional creative, I've been treated with absolute disdain by many of my clients. Insulted, degraded, defeated, and demeaned, I've had large and small companies with deep pockets hire me and then refuse to pay me. I had one client hold on to over 500 dollars in samples and my compensation after I leaped through hoops for series of last minute TV appearances promoting their products. They simply refused to respond to my invoices and emails. Turned out they were selling jewelry components filled with lead to the craft industry, so losing those samples was probably for the best. I've been called crazy, irrational, immature, unprofessional, audacious, and delusional. All of this after simply asking to be treated with respect and compensated fairly and in a timely manner. I've had editors explain that their bosses had no respect for authors, and that my concerns about the way in which my creative content was being presented were pointless. I've been cajoled into accepting less for doing more by people who should know better. I've had companies for whom I worked diligently and produced excellent content (from which they continue to profit) freely 'borrow' my ideas and repackage them without credit to me without shame or apology. On the occasions when I've complained, they've turned around and shamed me for it. I've had abusive bosses who were protected by upper management whose treatment of me was so abhorrent, I'm still recovering. I've been strong armed into signing draconian contracts, and threatened when I refused.

It's strange when you stop to consider how much of what we consume is the product of creatives and how little we value them. It fascinates that people who are tenacious and talented are treated like helpless babies. Coddled, mollified, undermined by pencil pushers and bureaucrats, we're endlessly underestimated.

The internet has not helped, because there is a proliferation of creative content and an attitude that it's all free for the taking. That's not to suggest that a free exchange of ideas or techniques is a bad thing. There's a distinction between being inspired, giving credit to the source of inspiration, and putting your own fresh spin on things. That's a dialogue. When you're copying and claiming ownership, that's theft. And the more people do it, the more creativity loses value. I've been asked many times to make something "just like this thing" and I've refused. Hire the original artist.

A few years back, I realized that a emotional response to these things was pointless. Business isn't emotional. It was up to me to decide what I would and would not accept anymore, and to act accordingly. I don't get angry or wounded, I'm not a victim. I'm in control. If something is not serving my bottom line, I walk away. I am flexible, professional and diplomatic, but I won't bend over backwards to accommodate someone who is not treating me with respect or compensating me fairly. I don't apologize for asking to be paid. I don't hesitate to ask for more. I am no longer willing to work for glitter, compliments, exposure, or the vague promise of eventual payment. I am no longer afraid to ask for what I deserve or to say no.

It's okay to say no.

I find when I ask for what I need, more often than not I get it. Sometimes it's a matter of educating clients about how much work it takes to deliver the goods. Then it's a matter of being willing to cut your losses when a client refuses to compensate you fairly. I don't take things personally, I make decisions based on my bottom line.

It starts with evaluating your worth, your time, what it takes to deliver, and being brutally honest with yourself. Is it a job or a hobby? It starts with being willing to speak out when we're not being treated fairly. It starts with illuminating the insidious undercurrent that creativity has no value. Because that's a lie.

As long as we accept less, that's what we'll receive.