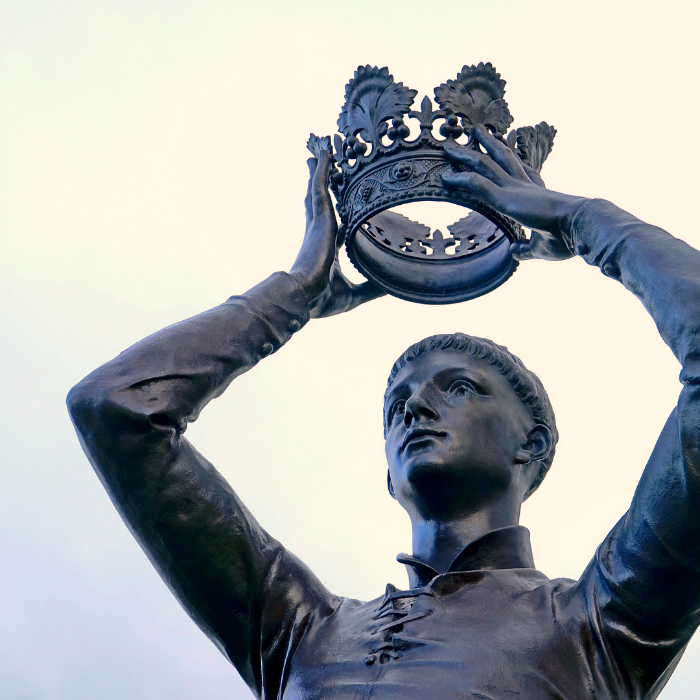 Wow. It's been a while. Do forgive. I have been busy with life and such. Now I'm not as busy, but it's fall so all bets are off. I'm mostly trying to survive the daily assault on decency, hope, opportunity, possibility, and joy coming from the #worstcircusever in DC. They're taking our health insurance, our unfettered access to birth control, our clean air and clean water...and apparently they're going to force us to all say, "Merry Christmas", even though absolutely no one ever stopped anyone from saying it. Personally, I prefer Cool Yule or Swinging Saturnalia, since most of what people do at Christmas is stolen from the pagans anyway. Let's go all the way back, if we're going there. I vote we bring Krampus back, and he starts with a visit to the Oval Office.

Speaking of the Oval Office, the current resident, Mad King Donald, is a mercurial man-child with an ego in directly opposed proportion to his capacity for compassion. So frustrated that he isn't getting what he wants, he's lined up a pile of felt tipped markers and a team of sycophants to applaud as he takes a wrecking ball to what's left of our once almost great nation. Executive disorder, anyone?

Chaos is the modus oporandi of the Demagogue.

Chaos has led me to reflect, what has made this madman so...mad? Why is he so desperate for approval, attention, and adoration? He seems to have everything one might need to be happy. Money, power, success, family, and now he's got the most important job in the world. Why isn't it enough? Why is he so thin skinned? What follows is my dime store analysis based on my personal experiences. It's just a lens that might offer some insight, or not.

It's a fascinating thing growing up among the richest of the rich. My husband and I both share this childhood experience. Neither of us grew up in the entitled class, but we grew up surrounded by blue blooded, olde money scions of the WASP persuasion. That's White Anglo-Saxon Protestant, in case you were wondering. When you stand with your face pressed against the glass of their existence, you see all of the subtle and blatant ways in which the deck is stacked in their favor and stacked against yours. They get the considerable benefits of money, connections, opportunities. They have the best educations, they take the best vacations, they own the best clothing and houses and automobiles. They meet the right people and get their stamp of approval. That's the hand stamp that gets you into the right clubs, and you will never get it unless you inherit it. The richest of the rich are handed everything they need to succeed.

What is interesting is that knowing what I know, having personally experienced the wealthy ruthlessly mock the poor and dismiss the "nouveau riche", I also know that the Trumps were never part of this world. Our president may have grown up among the uber wealthy, but he did not get the provenance that the right name and lineage bestows upon you. He got the money. The spoon in his mouth was silver plated. The Trump family fortune was a product of the Gold Rush, Elder Fred (Friedrich) owned a hotel, restaurant, and rumored brothel that catered to the gold miners. Fred moved to America to avoid the draft and he was permanently banned from returning to Germany upon his attempted return. Fred the younger (Donald's father) was a real estate mogul with a complicated reputation. He made his fortune building whites only public housing and fleecing the government for millions. It is rumored that Fred the younger facilitated Donald's way into Wharton through connections and a sizeable donation to the school. Donald may or may not have failed to excel, but managed to graduate. Young Donald was given millions that he mostly squandered. Deferment after deferment for mysterious bone spurs from the military was followed by bankruptcy after bankruptcy.

Trump's gaudy, gauche, gilded reality is a grotesque version of extreme wealth. He's crude, coarse, and unrefined. His three wives lack the polish of the Ladies Who Lunch, though his daughter does her best impression with her careful speech, sleek bleached blonde mane, and hand delicately perched under her chin. Donald is tolerated by the Country Club set, but more like Rodney Dangerfield in Caddyshack. He's got enough money to get in the door, so they've got to let him inside. He'll never make it into the inner circle.

The ultimate snake oil salesman, he has the gift of braggadocio. That can take you pretty far, especially among the unwashed masses. It can take you all the way to the White House, with a little help from your friends. Thanks, Vlad! Donald plays a self made successful business man on TV, and that must mean he's a self made successful business man. Never mind his six bankruptcies, habit of stiffing his contractors, and his impressive propensity for litigious behavior. He's got them flim-flammed and bamboozled. Step right up, folks! See the rich man in the red ball cap who really gets you! He's the perfect president for a Reality TV obsessed population.

Put him in a tuxedo and watch him try this act for the old money crowd. It's painful and painfully obvious that he knows it. However, he longs for their approval. Note that his cabinet is filled with people from Goldman Sachs and the 1% of the 1%. He spends as much time as possible at his exclusive golf resorts among the upper crust. He loathes the poor, minorities, women, the LGBTQ population, immigrants, and anyone who isn't one of 'them.' He hates his predecessor, a self made black man who rose to power on the merit of his intellect and accomplishments. It's obvious in everything Donald has done since he came into office. Every executive order dismantling Obama's legacy, every insult tapped into a keyboard, and every bald faced lie told with conviction. Trump panders to the poor, but he does it while holding his nose. He'll take their votes, their applause, and their donations while disparaging them in private. He loves the poorly educated, after all.

Donald is a pretender (not) to the manor born. He never has been and never will be a Blue Blood. That takes many generations of money. That takes being accepted in the 'right circles.' That likely drives him to distraction. It's no surprise that he was driven to be the most powerful man in the world, to have the stature, adulation, and prominence he feels he deserves. He longs to be able to tell those snobbish old money pricks to stuff it in their soft, white keisters. At the same time, craves their embrace and he may well finally earn it with the tax cuts he's got planned.

The rest of us will continue to pay the price for his insecurity and his insatiable need for attention and acceptance. And no matter how many adore him, unless everyone adores him it will never be enough. That's a terrifying thing to consider.