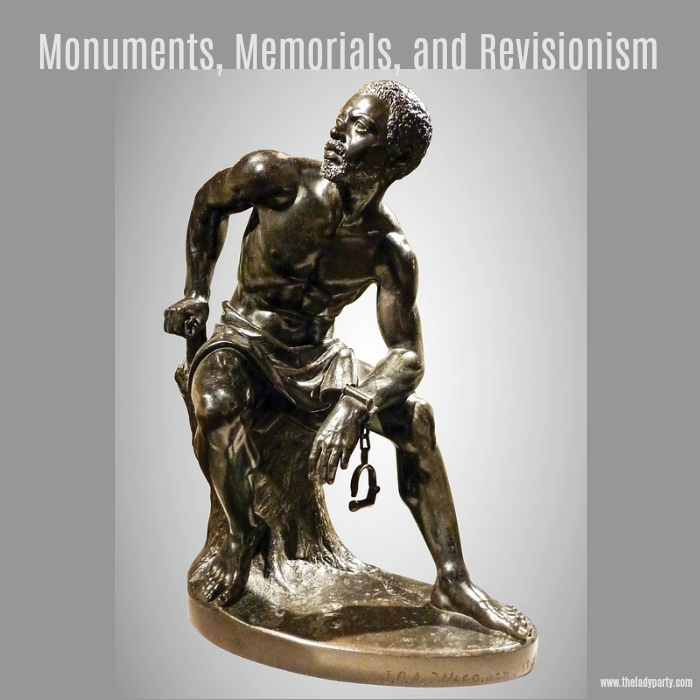 Monuments reflect the attitudes and beliefs of the people who finance and erect them. They are often political statements, even if they're not overtly political. They represent a point of view, not always grounded in logic, reason, or truth. They are not sacred, they are ephemeral. Even monuments we've come to see as cherished symbols of justice, freedom, righteousness are not sacred, because they are things and they are symbols. History itself is filtered through the perspective of the historians who write about it and the memories of those who experienced it first hand. Even those lenses are colored by biases and prejudices. Some people argue that we should not remove monuments, no matter the context in which they were erected. They claim that to remove them is to erase history. But the history being "erased" (or at least re-contextualized) currently is history that has been filtered through a flawed lens. It's revisionism. If we accept a revisionist version of history, then we are erasing the truth. That's an important distinction.

When we take down a monument because it represents a flawed perspective that deeply offends a large segment of the population, I believe we should replace it with a memorial that gives actual historical perspective. If we're going to take down statues that celebrate "Southern Heritage" and "The War of Northern Aggression", why not replace them with monuments to the millions of people who were torn from their families, shoved into ships, stacked like sticks of wood surrounded by the bodies of those who died on the journey, shackled, beaten, sold into slavery, raped, tortured, abused, and denied freedom? Why not replace them with monuments to those who fought for freedom, those who risked their lives to usher people from slavery into freedom, those who continued that fight through the Civil Rights Era, and those who continue that fight today? Monuments to David Walker, Frederick Douglass, Dred Scott, Harriet Tubman, Sojourner Truth, Nat Turner, Martin Luther King Jr., Rosa Parks, Trayvon Martin...and to those whose names we don't know who gave everything including their lives so that others might be free. Whitewashing the truth is not remembering history, it is re-framing it in a way that denies hard, cold, horrific reality.

We don't need to erect statues of Adolph Hitler, Pol Pot, Pinochet, or Saddam Hussein to remember history. We don't need to erect a statue of Bin Laden in Ground Zero to remember 9/11. We can instead erect memorials to the soldiers who fought and died in WWII, the millions who were brutally murdered in German Concentration Camps, the millions who died in Cambodia under the Khmer Rouge, the tens of thousands who were imprisoned, tortured and murdered in Chile, the hundreds of thousands of Iraquis murdered in genocide and purges, the thousands who were burned alive when madmen flew airplanes into the Twin Towers, and the first responders who died trying to save them.

One might argue that those who led the Confederacy can not be compared to brutal dictators. That's true, they did not personally order or oversee the genocide of millions, but they did support a system in which millions of people were forced into slavery and died never having known freedom. They stood on the wrong side of history. They defended that which is indefensible. When the South seceded and started the Confederate States of America, they became traitors to the United States of America. You will hear proud Southerners proclaim that the war was not about slavery, that it would have ended anyway without the bloodshed. That's conjecture at best. Yes, we were entering a new age of industry, but that was not going to happen overnight. Whatever the motives of those who fought on either side of the Civil War, the end of that bloody battle led to the end of slavery. We can't change history, but we can be sure we're not rewriting it to mollify those who wish to deny the complexities of the slave trade, the slave economy, and the bloody battle that brought that dark chapter of our nation's history to a close.

The truth is, the majority of the monuments being taken down were built as political statements in response to Jim Crow laws and the Civil Rights Movement. They were propaganda tools meant to sanitize and re-frame history, not protect it. We have made progress built on the shoulders of those who risked their freedom, their safety, their security, and often their lives to stand on the right side of history. Let's celebrate them with monuments, and tell the hard truths with memorials. Let's not forget history, but let's remember it truthfully.

We have evolved, and though we have a long way to go, we cannot go backwards, we must continue to march bravely forward.