Confessions of a Late Bloomer 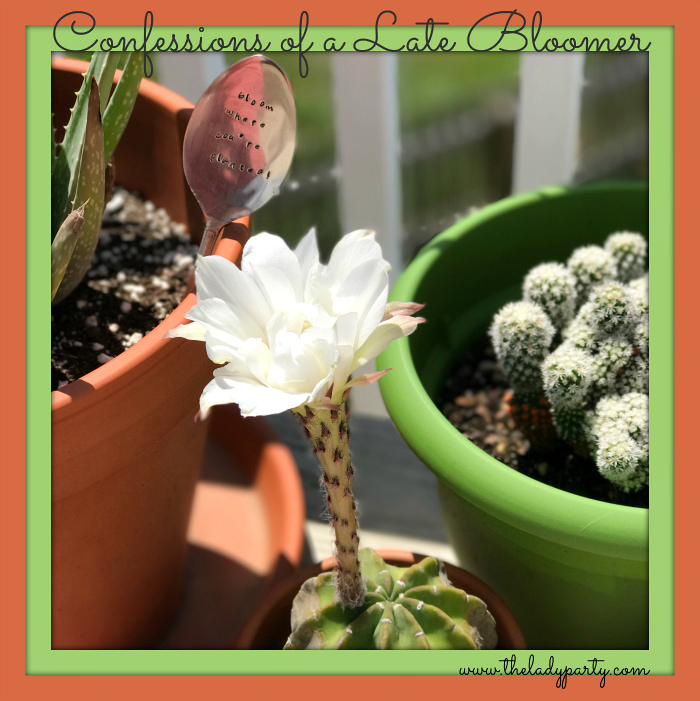 I have been dragging these cacti around for years. They were given to me to care for, and I've done my best despite my brown thumb. They're barely hanging on, and only thrive in the summer months when they can sit outside and soak up the sunshine and raindrops. They're bedraggled and half dead, and I have counted them almost out many times. Yet, ever the stalwart fighters, they continue to surprise me every summer. This cactus has grown a flower twice. As you can see, this little cactus is half dead. Yet, somehow, it summons the will to form a stem and grow a flower that blooms for eight glorious hours. Weeks of anticipation, for eight hours of triumph.

I can relate to this little cactus. Sometimes I feel half dead, bedraggled, and lacking in sufficient sunshine and raindrops. There are days and even weeks when I think whatever hope I had of blooming is delusion. Last week was one of those, and it was a doozy. I was down, out, and being pummeled relentlessly. It was tragi-comical, emphasis on "tragi."

A seemingly wonderful opportunity falls to shipoopy. I come back up for air.

"But wait, this other opportunity is happening!" Take that, chaos.

At one point, I tossed up my virtual white flag and surrendered.

"Okay, Chaos. You win, I give up. I'm just a half dead cactus in a crappy clay pot."

This morning, I woke up with a renewed resolve. I remembered that I'm not alone. There are millions of women over 50 who feel neglected, dejected, and discounted. Our knowledge has value, our passion has not faded. We're not half dead, we're fully alive. Late bloomers bloom best, because we're survivors. We've survived the unspeakable, we've navigated the impossible, we've been knocked down, shut up, and rejected over and over again. Yet, ever the stalwart fighters, we continue to surprise. We summon the will to form a stem and grow a flower even if it only blooms for eight glorious hours. Then we do it again.

We're not too old. It's not too late. We matter. We have something rich, resonant, and ripe to bring to the table. We have the gift of our experiences, and the incredible insights they provide. If we're not going to be invited, then we need to rise up and start crashing the damn party. Even better, we need to start throwing our own party. Might I suggest The Lady Party? There are millions of us, and we can join forces.

Maybe the marketers, advertisers, media, and retailers will realize that we have the money, the time, the power, the talent, the knowledge, and the inclination if we start to show them why we matter. Maybe they'll start celebrating us if we let them know that we want to be celebrated. There is a lie, that is endlessly perpetuated. It is the lie that we (women of a certain age) don't want to see ourselves reflected in advertising, TV, movies, and magazines. I've heard it time and time again, usually from men, often from older white men, who sincerely believe that older women want to become invisible. They'll flat out tell you that we don't want to see a woman over 40 on the cover of a magazine or playing a romantic lead in a TV show or movie. They'll insist that older women are unattractive and unappealing. They'll sincerely suggest that they know what we want. For every Grace and Frankie, there are thousands of romantic scripts with a sixty something male and a twenty something female. There's a lot of fear of older women and our power. It's up to us to own that power and exercise it.

We may be counted out, but we're only out for the count if we refuse to get up and fight. We've got plenty of bloom left in us.