She Seeks She Shed by the Seashore 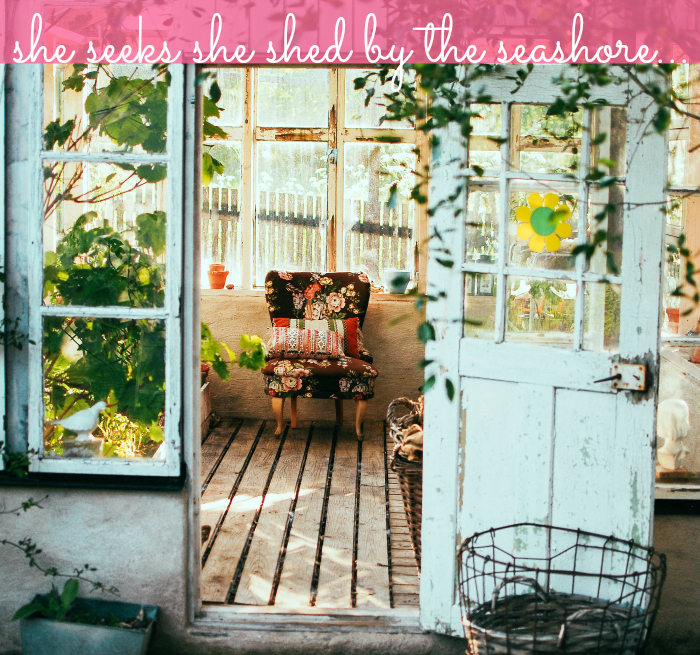 Over the almost 20 years since we've been married, my husband and I have moved nine times. That's almost every two years. In my 53 years on the planet, I have moved 32 times. Apparently, moving is my thing.

It's a lot of moves.

We have at least two more moves until we settle. This is if we ever settle. Will we ever settle? I'd like to think we'll settle one of these days. I'm hoping we settle by the ocean, in a renovated vintage cottage flooded with light with a little fenced backyard for the dogs. I'd like lots of older trees around that yard, so it felt private and secure. Older trees tend to have a lot of birds, and birds like to sing in the morning. That would be nice. I'd like a little she shed where I could make art and write. It would be divine if the kitchen opened up to a pretty wooden deck where we might sit in the evening and enjoy a cocktail or two. If I can walk to the beach from the house, that's even better.

I don't need much.

However, I do need room to breathe. My husband and I both work from home, and in this small apartment there is no breathing room. Our offices are in the bedroom. This means I have no privacy when I'm getting dressed. You may think that's not a big deal. We're married after all. Hasn't he seen everything there is to see?

I like privacy when I'm getting dressed. It's more complicated now that I'm older and curvier and things aren't quite where I'd like them to be. I want to get them properly arranged before I share them with the class. Is that so wrong?

I'm having some problems living in a hay barn on a farm in the middle of farm country related to my allergies and asthma. I have no breathing room, and I can't breathe. This is not a huge plot twist. They don't call it Hay Fever for nothing, folks. Therefore, we're mulling over the logistics of a possible 10th (or 33rd for me) move.

As such, I have begun a new adventure in "looking for houses." Whee.

I'm pretty good at finding houses. I'd be even better if my budget was higher. I say this, but no matter the budget, if you just had another 50k things would be so much better. Heck, if you just had another million or so, things would be SOOOOO much better. I don't have a million or so, or 50k more, or much at all. This means I will have to suck it up, Buttercup. It means that whatever I can afford is likely to have....issues...and also...problems...and possibly...complications. Issues and problems and complications...oh my! My challenge is finding something that ticks off most of the boxes with the fewest issues and problems and complications at a price we can afford, with two bedrooms, room for an office, a yard for the dogs, taxes under 3k, within twenty minutes of our current location, and no neighboring hay fields, trailer parks, or Dixie flags. That sounds reasonable.

It is not reasonable. It is the impossible dream. Yet, I am a dreamer and I will not give up on my dreams, dammit.

Every house that I find creates a timeline, a possible future. In some reality, I am living that possible future. Or maybe not, but I like to think that I am. Being a writer, I make a narrative to accompany this timeline.

Here is the vintage kaftan I will wear while drinking cocktails by the pool. It's beaded around the neckline and has tiny pom-poms along the edges of the arms and hem. We have a tiki bar, fully stocked, with everything I need to make tropical cocktails. The only thing missing is a cabana boy.

This is my new best friend and neighbor. Her name is Veronica. She loves shoes, Joni Mitchell, and thrift shops! I do too! Hooray! Isn't she adorable? She's adorable, trust me. You would LOVE her!

This is where I go for coffee and conversation with my new best friend Veronica. It's called A Cup of Sunshine. They sell fair trade coffee, gourmet pastries, and they have a delightful selection of artisan handicrafts, handmade organic soaps, and letterpress greeting cards. Veronica and I go to yoga together once a week, then we hit A Cup of Sunshine for a cup a java. Between the yoga and daily walks through the new neighborhood, I've lost thirty pounds! I can wear yoga pants again without an oversized t-shirt covering my ass. I don't have side boobs anymore!

My husband and I turned the shack in the backyard into a stunning She Shed. It's got a stone patio, a loft bed, and little window boxes with petunias. This is my 'room of my own', the one Virginia Woolf recommended. It's divine. It's also where I write my best selling non-fiction humor books and make projects for my DIY blog. Sometimes Veronica comes over with the gals from our yoga class and we watch chick flicks, drink wine, and hang out in the She Shed. These are actual Lady Parties, not just virtual ones on the internet where I talk to my phone.

This narrative expands and lingers until this new house gets sold in a day, or has too many issues, problems and complications. Then I toss this narrative into the trash and prepare for the next. Sometimes I do this when we're not going to move, just for fun. I'll pick a place that sounds intriguing, look at real estate listings, and ponder the possibilities. I've pondered Hawaii, Puerto Rico, Long Island, Savannah, Atlanta, Tybee Island, The Gulf Coast, Los Angeles, the Bay Area, Petaluma, The Florida Keys, Italy, the South of France, Fiji, Bali, Bora Bora, Seattle...

Over the past few weeks of pondering possible new homes, I've had several narratives dashed against the rocks of disappointment. I'm not sure how many more I can endure. One can only hope these harrowing First World Problems are over soon. I'm running out of narratives and new imaginary best friends.

I live in an apartment in a barn on my sister in law's fifty acre horse farm in Amish Country. It's a perfectly delightful apartment. It's a picture postcard area. I have little about which to complain.

And so the search continues...

She seeks she shed by the seashore. Will she ever find it?