Peacocks are Jerks (and Other Observations from the Farm) 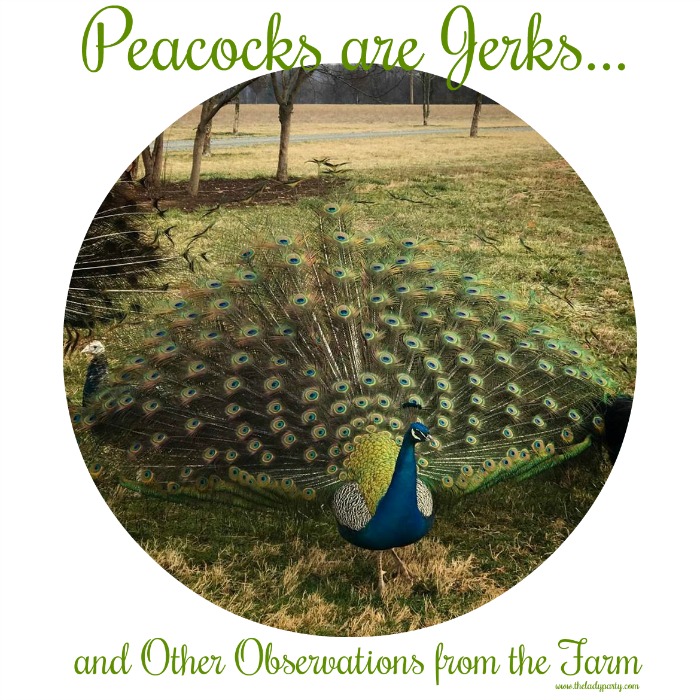 I realize this is disappointing information. After all, they're beautiful. However, they're far more beautiful when they don't live in your yard. They are loud. They are rude. They poop giant poops on everything. They scratch the paint job on your car with their giant talons.

We live on a 50 acre farm with five peacocks. The peacock that decided to live full time in our tiny yard is named Schmedly. This is not a dignified name for a majestic peacock, but Schmedly has been driving us slowly insane. Therefore, he does not get a majestic name. He's lucky to have a name that isn't an obscenity, which is what we yell when he perches on the porch and begins making a sound that is best described as a high pitched siren like distress call. It sounds something like, "HALP! HALP! HALP!"

"HALP! HALP! HALP!" Is what I yell every sunrise from my porch into the vast, green, emptiness of farm country.

In other news, Chickens are cannibals. Somewhere in their Velociraptor DNA are trace vestiges of their violent lizard brain. If a cute, fluffy, baby chick pecks another cute, fluffy, baby chick on the bottom and they draw blood, all of the cute, fluffy, baby chicks in the flock will attack the bloody chick relentlessly. This is deeply disturbing. This is why a red light is important when you're brooding baby chicks. The first time we had baby chicks, I had three bins to keep them separated. Regular chicks. Cannibal chicks. Bloody chicks. The two cannibal chick instigators were unstoppable. I named them Jeffrey Dahmer and Hannibal Lector. (In retrospect, Hannibal Pecktor would have been more apt.) Eventually, we had to outfit these two deviants with tiny backpacks and send them off into the world. This is a euphemism.

Farming is not for the faint of heart.

Fun fact: You don't need a rooster to have hens. I'm just sayin'.

Farms are stinky. Here in Amish Country you are likely to find the pungent smell of liquid poo wafting through the air several times a year. We call the machines that distribute this less than fragrant fertilizer The Poop Spreaders. When The Poop Spreaders cometh, keep your windows closed. You have been warned.

There is a lot of poop on farms, which adds to the overall stinkiness. The size, shape, and consistency of the poop varies wildly. Chickens make little runny poops, peacocks make big squishy poops. Cows and horses make large hay filled patties. Sheep are poop outliers, they make tiny round pellets that look like BBs. If you walk around the farm, you will step in the poop. Rubber boots are recommended.

Horses are kicky. Literally. I live in a barn apartment. When the horses are in their stalls overnight, they kick. They kick the stalls so hard it sounds like the barn is being hit by a wrecking ball. This drives my dogs crazy. This, in turn, drives me crazy. Kicky horses make barky dogs.

There's a reason they call it Hay Fever. The reason is that hay is evil. I live in a hay barn. I have not slept in my bed for the better part of a year. I am allergic to hay and it lives on the other side of the wall from our bedroom. Hay is cut, baled, and stored several times a season. This seems to happen just as I start to feel like I can breathe again and maybe sleep in my bed. I miss my bed. Between the hay, the kicky horses, the barky dogs, and the jerky peacocks and roosters, I don't get much sleep.

It's not all bad living on a farm. If you like cute baby animals, there are lots of them each spring. For about a week in early summer the fireflies rising from the corn put on a magical light show that takes your breath away. Hens are fairly docile and they make fresh eggs every day and a half in exchange for some shelter and chicken feed. Horses aren't as kicky when they're grazing in the fields, and they love a soft pat on the nose or an apple. You can get a beautiful bouquet of fresh flowers for a few dollars from the Amish, along with farm fresh produce and free range eggs. The views are picturesque and the livin' is easy. Well, unless you're a farmer because they work day and night.

I'm not a farmer. Have I mentioned that?

I'm more of a city mouse than a country mouse. Well, truth told, I'm more of a beach mouse. I'm currently working on a relocation program. We'll miss the views, but we won't miss the peacocks.