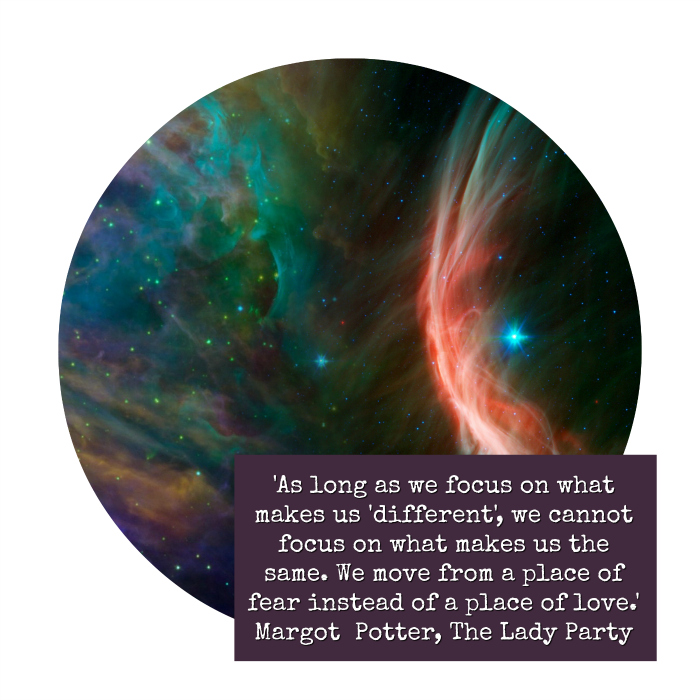 Caveat lectorum: Ima just leave this here. You do with it what you please. These are my thoughts. I am not claiming them to be truth. I am merely postulating that perhaps these thoughts have some merit or at the very least provide some food for thought. They presuppose that people would be willing and able to release strongly held attachments to clans, tribes, and groups. We are hard wired to form them, so this would require short circuiting that hard wiring. That is the challenge.

What if we stopped separating each other and ourselves into groups based on race, religion, nationality, political views, sexual orientation, gender, or any of the other myriad of ways in which we see ourselves as separate?

What if we let go of all of this, including the idea that any of these the ways in which we see ourselves as separate automatically make us part of a group. What if, instead, we recognized that we already are all part of a group, the human race? What if our interconnectedness to each other, and to the universe in which we live, superseded and suspended our divisions?

Then, what if we moved from a sense of unity based on our common humanity?

This is where my thoughts come in. I believe that all of these ways in which we separate ourselves are illusions. They are distinctions and divisions based on fractions of percentages of DNA or thought processes or geographical locations... I believe that if we could move beyond the constructs, hierarchies, archetypes, prejudices, and limitations, we could evolve. We could eradicate poverty. We could end discrimination. We could come together to end violence, war, slavery, hunger, ecological destruction, disease...

I believe that this is the greatest challenge for humanity.

“Pull a thread here and you’ll find it’s attached to the rest of the world.”  Nadeem Aslam


The truth is, within our current construct, there is bias, there is discrimination, there is hierarchy, and there is privilege. We can't wish these things away, or deny that they exist. However we do not have to be limited by them. There are overarching universally accepted mythologies that have penetrated and infiltrated every aspect of society. They prevent us from finding connection. They allow for the insidiousness of oppression, greed, war, poverty, discrimination, violence, abuse, and hate to find justification and amplification. As long as we stay firmly rooted in the illusion of disconnection, these things will continue to thrive. As long as we focus on what makes us 'different', we cannot focus on what makes us the same. We move from a place of fear instead of a place of love.

"The fundamental delusion of humanity is to suppose that I am here and you are out there." Yasutani Roshi, Zen Master


We treat some people as worthy and some people as less than. We feel worthy or we feel less than. We limit ourselves and others. If we saw every person whom we encountered as a pure and perfect expression of the divine, we could never treat anyone with disdain. If we could let go of limiting and defining thoughts and allow for the endless expressions of being, we could find our way to a singular expression of unity.

"The infinite vibratory levels, the dimensions of interconnectedness are without end. There is nothing independent. All beings and things are residents in your awareness." Alex Grey

“The more we understand the One Idea, how all of life is interconnected and interdependent, the more we can act in positive ways for the good of all.”  Lawrence Overmire


There is no us and them, there is only us.

And those are my thoughts and feelings today, for whatever they're worth. Do with them as you please. I'm not a guru or a master. There are no gurus or masters. We are our own gurus and our own masters. We are, all of us, human beings having a human experience.

"We are stardust, we are golden. We are billion year old carbon. And we've got to get ourselves back to the garden." Joni Mitchell