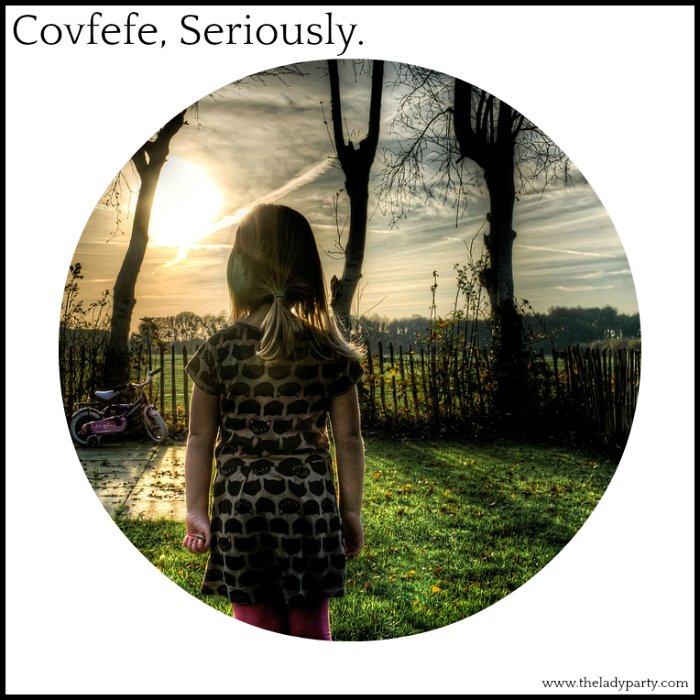 This is the early morning message from the leader of the free world.

An unraveled man child wandering the White House in a KFC crumb riddled terry cloth bathrobe tweeting nonsense in the darkness, this is our president. This is our collective shame. The lights are on, but no one is home. No one is home but the turban haired snake oil salesman who duped millions into the false belief that he gives a flying fuck through a rolling doughnut about them, their futures, and their children's futures. He cares more about doughnuts, believe me. He won't be around to see the devastation his insouciance will reap.

Yes, that's a five dollar word, unlike the word deficit that is covfefe.

The future beckons, but it is increasingly dark and depressing. What will be left when my daughter graduates from college? A dictator doesn't need bright young political minds who want to make the world a better place, he needs hangers on, sycophants, parasites, profiteers, and opportunists. Oh, and he needs an army of storm troopers, desperately clutching their guns, with a blood thirst for 'elitist liberals.' He needs the avaricious scions of the one percent to fund his war chest. He needs the Russian Oligarchs, to fill his bank account and stroke his insatiable ego. He needs the poorly educated, angry, willfully ignorant voter base, who bitch endlessly about the Welfare State yet expect the government to force back the hands of time so they can have their old jobs and old lives back.

I've got a message for you, Trumpers. Nobody owes you a job. You alone are responsible for your current reality. You alone can change it, by getting off of the couch and learning some new tricks. Your Big Daddy is pissing all over you and you think it's raining. You are collectively responsible for dismantling a century of progress. You're too ignorant to see it, and you won't see it until everything crumbles around you and you're left standing in the rubble. You may not even see it then, which is the saddest refrain to this macabre melody.

Newsflash, folks. We're the laughing stock of the world. Congratulations. You did it. And today, in the ultimate middle finger to the entire planet, your Idiot in Chief decided to join Syria and Nicaraugua in leaving the Paris Agreement. Global warming is not a hoax, but climate change denial is a hoax financed by the fossil fuel industry. When your children can no longer breathe the poisoned air, swim in the polluted seas, bathe in the toxic water, and choke down their poisoned food, remember that you voted for this shit show. When they stand in front of you facing their apocalyptic future, asking you why you let this happen. You can answer them with this...