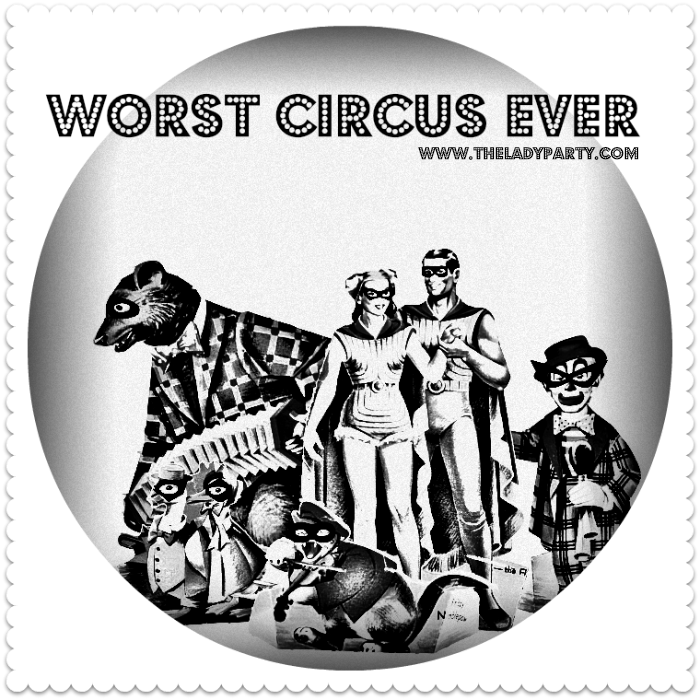 Like every week since the #worstcircusever pitched it's crappy big top in DC, it's been an avalanche of chaos. It's becoming harder and harder to keep up with the constant onslaught of insanity. Here's a refresher of some of this week's highs and lows:


A federal judge has refused to dismiss the lawsuit against POTUS regarding inciting violence at a campaign rally in Louisville. (You may recall him snarling, "Get 'em out." Apparently, his MAGA followers took that a little too literally.) Much like yelling "FIRE!" in a crowded theater, it turns out that inciting violence in a crowded campaign rally may not be covered by First Amendment rights. (For the record, this is not the only lawsuit involving violence at Trump rallies.)

Jared Kushner, a 35 year old real estate magnate with absolutely no diplomatic experience and an obvious distaste for desert camo, was sent to Iraq, in a chambray button down and a custom made navy blue Brooks Brothers blazer. You can buy one just like it here! Don't worry if Brooks Brothers is out of your budget, there's a factory in China busily working on a knock-off for the Ivanka Trump line for Sears.

FLOTUS by Proxy Ivanka Trump is settling into her office at the White House. She's decorating it with items from the Trump Home Furnishings collection available on the Trump Organization website. Call now, operators are standing by.

Syrian dictator Assad deployed chemical weapons, resulting in the gruesome deaths of babies and children. There's absolutely nothing funny about this, folks. There are no words, just tears and bombs, but apparently no reprieve for refugees.

The State Department cut funding to the United Nations Population Fund (UNFPA), an agency that provides family-planning and maternal heath care in more than 150 nations. Because regulating women's reproductive decisions is a top priority for this administration. No Big Government! Unless they're in your uterus, bedroom, or bathroom. In which case, make room for the GOP.

VP Pence made it clear he lacks any self control when he admitted that he is incapable of dining with a woman alone who is not his wife without harboring impure thoughts. His wife has also suggested that same sex friendships and teachers turn children gay. It's apparent this dynamic duo harbors some pretty kinky impulses they're co-repressing. Sadly, they feel compelled to project them on the rest of us. Thanks, but no thanks.

Speaking of women and this administration... POTUS, he of the free form grabbing of genitalia, declared April Sexual Assault Awareness Month. No, seriously. You can't make this shit up, folks. He's working with his pervy pal Bill O'Reilly on an online workshop and e-course. Okay, that part is not true.

POTUS accused Obama Administration of being weak on Syria. Thanks, Obama. This week his many, many, many tweets on this topic came back to haunt him.

Alt-Right Poster Boy Steve Bannon was removed from the National Security Council. Nothing to see here, according to White House spokespeople. Rumor mill has it that Shadow President Bannon and his arch nemesis and Brooks Brothers spokesmodel Jared Kushner are butting heads in an epic power struggle.

In other news, The Senate went nuclear, and all hope of future cooperation exploded in a mushroom cloud of partisan politics. Not that we had much hope after 8 years of Mr. Turtle Shuts Down Washington. All memory of past obstruction was lost in a thick soup of irony. How dare they fillibuster? Garland who? All hail Chief Justice Gorsuch.

Devin Nunes, turncoat, finally recused himself from the Russia investigation, temporarily. This, of course, after the irreparable damage enacted by the covert shuffle of misinformation from the White House, to him, back to the White House. The borscht has gotten so thick, you can eat it with a knife and fork. Though we advise against it.

Ignoring science, logic, and the future health of the citizens of the planet, POTUS and our elected officials have been busying themselves with deregulation of the pesky EPA. What, me worry? Who needs clean air, clean water, clean soil? Surely not the innocent children we've vowed to protect from harm. Need fresh air? Build yourself a golden bubble and get over it.

POTUS sidestepped congressional approval, and his own advice, and dropped 59 Tomahawk missiles on an airbase Syria. The cost of this mostly for show military action? 50 million dollars. The Russian government, feigning surprise, was forewarned.  Wag the dog. Oil prices rise. Something doesn't add up, better ask Vlad.

And with that, we're mostly up to speed on the state of the nation. Of course, we have an entire weekend ahead. Who knows what fresh hell awaits?

It's the end of the world as we know it, and I feel fine. Join me tonight at 8pm EDT for The Lady Party LIVE, we'll be talking about stuff. I have no idea what. It depends on where the night and the champagne take us.