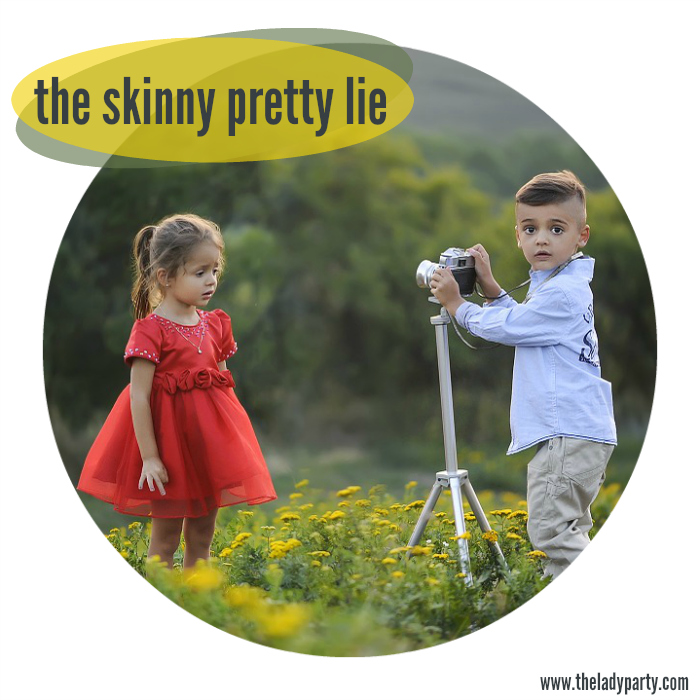 Today we're talking about the Skinny Pretty Lie. It's the lie that keeps on giving from the moment we arrive until we shake this mortal coil. We buy it, because it's what the media reinforces and what the people around us reinforce because they bought it too. Be skinny, be pretty, or be irrelevant.

I have grown weary of The Skinny Pretty Lie. It's worn thin. Pun intended.

Yesterday, I was reading Vanity Fair magazine and I stumbled on an feature of Elon Musk's mother Maye about her career as a 60 something fashion model. Vanity Fair features skinny pretty famous or soon to be famous people on a regular basis in between deep diving articles about all manner of fascinating topics.

Maye Musk is exceptionally skinny and pretty. She's likely had the benefit of good genes combined with excellent dermatological intervention. She likely takes good care of her body. She also has a great hair cut and a budget for well tailored clothing. If being beautiful is your job, then maintaining your appearance is one of the requirements for continued employment. Maye is tall, svelte, swan necked, and high cheek boned. She's a genetic anomaly, like most high fashion models. She does not have a turkey waddle or a belly pooch or droopy jowls, unlike the majority of women over 50 who cannot afford to fight gravity with regular facials and high powered laser beams. She has wrinkles, but a scant few. To be clear, I do not care if she's had work done. I think women should do what makes them happy. If a little nip and tuck does that trick, that's your business. However, I do care that we celebrate women for being skinny and pretty after 40 as if that's a remarkable accomplishment.

Defying all logic, you've managed to maintain your physical appearance!

I like lip gloss, pink hair dye, Botox, and cute shoes as much as the next gal, but I thought that once I reached menopause the conversation might shift a little. I had this radical notion that women over 50 would be free to be celebrated for their thoughts, talents, and accomplishments. I thought that The Skinny Pretty Lie would lose some of its power.

Stay pretty and skinny or go away. If the fickle finger of fate fucks up your face with a dab too much silicone or a skootch too much Botox, do not tempt the paparazzi and the masses. They'll come after you with an epic shit ton of vitriol. Just ask Renee.

Why can't she just gracefully, they will ask? Look at this other celebrity who looks amazing for her age! Yes, let's look at her, and while we're looking let's figure out who maintains her visage because they have a better handle on the procedures. She may have been born with it, but she's getting assistance and it's most definitely NOT from Maybelline.

The Skinny Pretty Lie will make an exception for the not skinny if they are pretty. Then the lie says, "She's so pretty, in the face." If she's not skinny, she should be curvy in the 'right places.' She should have a well defined waist and be cankle free. She should be bootylicious and amply breasted. She should not have mounds of lumpy cellulite, excessive wobbly bits, or unfortunate droopy parts. The underlying sentiment, spoken or not, is, "If she'd lose that weight she'd be gorgeous!" If she does lose that weight, the accolades fly! Have you seen how skinny and pretty she is now? Wow! How did she do it? Do tell!

"I have to be honest, even though I said I loved myself when I was fat, I was lying. I love myself so much more now that I'm skinny," she'll say.

The media will claim that women are angry at her for losing weight after being an outspoken champion for curvy gals. That's not quite true. Women are more aptly disappointed because she claimed to be their champion, lost weight, and then betrayed them by fully embracing The Skinny Pretty Lie.

The Skinny Pretty Lie will also make an exception if you aren't what society deems as pretty, but you're skinny and can afford well made clothing and accessories. As long as you're skinny, clothing which has been designed for smaller frames will drape as intended. Get a great haircut, wear wonderful hats, pile on bold accessories, add some fabulous shoes, dazzle them with your larger than life fashion sense, be outrageous. You will hear things like, "She's a style maven!" You will hear words like iconic and inspired and chic and brave.

Men, however, can be overweight and unattractive as long as they're rich and powerful. Note that they'll usually accessorize with a pretty skinny companion. This signals their wealth and power and detracts attention from the physical attributes they lack.

It's exhausting, isn't it?

Maye Musk has two Master in Science degrees and is a registered dietician. She's a very smart and accomplished woman. She has far more to offer than her looks. Still, the story the media embraces is that at 68 she's still so skinny and pretty she gets regular work as a model.

“I'm living proof that (you can) find work for an older woman," Musk says proudly in the "It Girl" feature from Vanity Fair.

“Who would believe at 68 you’d be getting better jobs?” She asks. “I wouldn’t have believed you if you told me that when I started 53 years ago. But it’s just so much fun.”


Well, Maye, since modeling jobs are a direct result of your considerable genetic physical attributes and your ability to finance their maintenance, I would believe it. For the record, I'm glad she's having fun and getting work. It's wonderful to see a woman over 50 thriving professionally. However, it's not a shocker that a woman who looks like Maye does at 68 is getting better jobs than she did at a younger age. The odds are in her favor, it's a matter of percentages. How many women over 60 who look like her are running around out there? Carmen Dell’Orefice, Christie Brinkley, Iman, Beverly Johnson...a handful of women who are genetically predisposed and dermatologically enhanced.

I am not hating on Maye Musk. I wish her all of the joy she can manifest. I just wish that after 40 how we look took a back seat to who we are, how we think, and what we do. I wish we could embrace and celebrate women at any age, size, and income level. I wish that the Pretty Skinny Lie would give way to the Fascinating As You Are Truth. I wish that women could give themselves that gift and also offer it to other women.

Pretty and Skinny are perfectly fine things to be, but at some point and by a certain age it seems like there might be some value in recognizing and celebrating the other considerable things women have to bring to The Lady Party. We can shift that, but it requires acknowledging and then rejecting The Skinny Pretty Lie.