In Celebration of Nonsense, Wonder and Magic 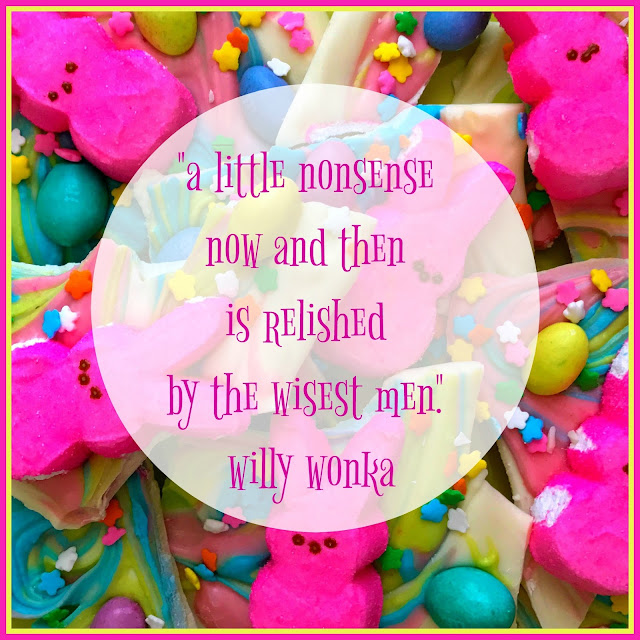 It's time for a little nonsense, don't you think? It's all been so heavy lately, so filled with such sturm und drang. I don't know about you, but I'm plum tuckered. The quote above is a favorite from my favorite film, Willy Wonka and the Chocolate Factory. I prefer the original, with Gene Wilder. Sorry, Johnny, but your Wonka was too weird. Gene captured the perfect blend of dark and light and that's where the real magic lives.

But I digress, something I am wont to do.

Magic is a little bit dangerous and a little bit wonder full and it is sprinkled with a healthy dose of nonsense. I am a believer in wonder, and nonsense, and magic, and possibility. Possibility is born from a heady mix of these three elements. Reality is an illusion, after all. That's science, not conjecture. I believe in science, in case there was any doubt. Science and magic are not mutually exclusive, in fact they are inseparable. It's all perspective, and a trick of the light. To master the illusion, one might do best by casting themselves as the magician.

After the onslaught of the return engagement of the pause that is meno, a fresh perspective is most definitely in order. This grumpy Madge sucks. Somebody grab the hook! Time for replacement Madge.

Oh, look! A cape! Yes, there must be a hot pink satin lined black cape!

Perhaps a knee high laced up boot of some fashion?  Should I dare?

Yes, yes I should.

The quote from Willy Wonka is interesting because the origin is murky. There are variations that go back to ancient Rome, and probably further. It is often attributed to bad boy poet Lord Byron and philosophical writer Samuel Butler, but neither of these sources have been confirmed. Horace uttered something similar, but not identical. How old is this sentiment, then?

One wonders, doesn't one?

Do you see where this is going?

We can reinvent ourselves at any moment. We can wave our wand and make magic. We can, if we so choose, maintain our sense of nonsense, wonder, and magic and remember not to take ourselves or the illusion too seriously.

"A little nonsense now and then is relished by the wisest men." Anonymous