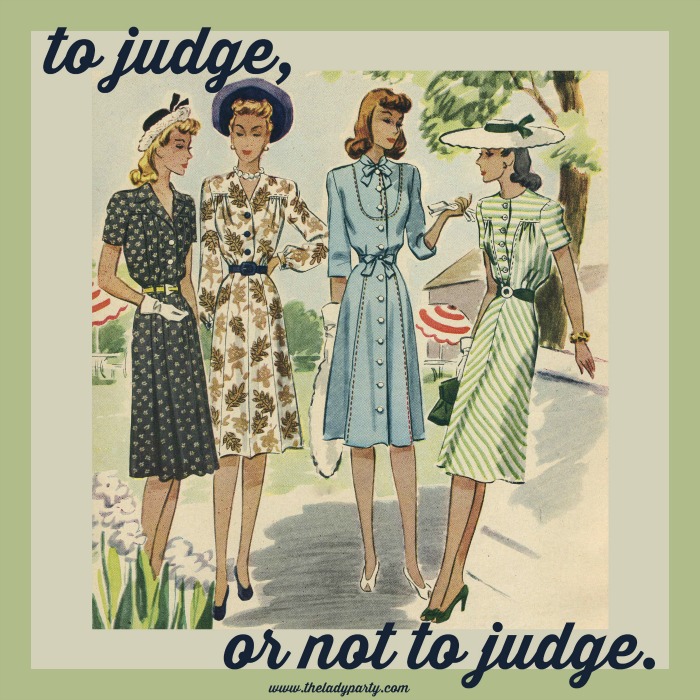 This morning I spent far too much time judging people for judging.

Were they wrong to make fun of a perfect stranger?

Was I wrong to step in and defend a perfect stranger?

Why did I get involved?

I'm not the morality police, and neither are they, and this is where it gets sticky.

The photograph was shared originally by the poster because she thought it was 'hilarious.' I didn't find it hilarious. I didn't find the comments underneath the photo hilarious. I have never been a fan of making fun of other people. Maybe that's because other people made fun of me when I was a kid. I was mocked relentlessly for my hair, my pale skin, my odd clothes, my small breasts, my weird personality, my intelligence, my inability to fit in. It was awful. I have never forgotten that.

When the kindness of this making fun of this woman was questioned, the comments that ensued were fascinating. They dug in deeper. Their arguments went from 'hilarious' to 'indecent' to 'poor parenting' to 'illegal'. I was a bad parent, dumb, and lacked common sense because I disagreed with them. All manner of sweeping judgments were made based on a photo of a total stranger.

Eventually, it was stated that if she was a man she would be considered a pedophile. Now that was a pretty incredible leap.

None of the people in this thread knew this woman. This photo was not shared with her permission. The woman in the photo was not stark naked. Her top half was covered by a bathing suit top and her sheer cover up. Her bottom half was concealed by her body. She had a Level 3 panniculus or pannus, which is an excess of skin around your waist. Her excess skin covered her sides and front and extended to her upper thighs, which makes it Level 3. Because of this, you could not see her bathing suit bottom. It is probably hard to find a bathing suit for this particular physical condition. It's probably hard to find clothing for this particular physical condition. Was she naked on the bottom? I have no idea. Neither did anyone else in the thread. I doubt that she was naked. Most stores have a no shirt, no service policy, and I assume that also covers bottoms. The store would have most likely asked her to leave or cover up if she was exposing her genitalia. We can all agree on that. However, I could not see her vagina and neither could they. If I was at a store and an adult was exposing their genitalia to a child, I would have alerted the store manager immediately. This woman was not exposing her vagina to a child. Without further evidence, the exposure point is moot.

I saw a woman in a bikini, a sheer open sided top, and some flip flops who did not know she was being photographed. She was standing behind a grocery cart with one foot on the rung of the wheel area, a young child was sitting in the cart. I saw a woman who felt comfortable in her body. I doubt this woman cares much what other people think. I applaud her for that. While other people insisted she was teaching her child to be indecent, I think she was teaching her child to love herself regardless of her size or her physical appearance. I don't know her though and I am ascribing my own bias to her choices.

Truth, here. I would not wear this particular outfit in public. I am not comfortable enough in my body to walk around in that state of undress at a store or even at a beach. I wish I was. I am not even comfortable enough in my own body to expose my arms these days. That's something I have to work on, honestly. Yes, I would be surprised if I saw this person in line at the store in this outfit from that angle. I'd probably think about it for a moment and figure she came from the beach or the pool and stopped at the store on her way home. I'd think it must be nice to be so comfortable in your body. I'd wonder why I feel so uncomfortable in mine. Then I would focus on other things, because this woman's fashion choices are none of my business.

Conversely, how other people feel about her fashion choices is none of my business, until it becomes my business.

My question is, at what point does it become my business? Should I have commented on this thread or should I have said nothing? Is judging people for judging other people an exercise in futility? Is it my job to tell other people how to respond to what other people wear? They said she was breaking the law, but I reminded them that sharing a photo of a person (and particularly a child) without their permission was against the law.

If I was at the store, in line, and people around me started making fun of her, I would say something. If these people making fun of her were my friends, I would ask them to stop. If they refused, I would walk away and deeply question our continued friendship. Someone asked me what I would tell my child, I would tell my child that it is not okay to make fun of other people. If I am on social media, and see virtual friends making fun of other people, should I say something? If they refuse to stop and defend their actions, should I question our continued friendship?

Making fun of other people for how they look is bullying. Regardless of how you feel about their fashion choices, taking a photo, posting it online, and saying it's 'hilarious' is bullying.

I am responsible for my choices, my actions, my reactions.

Have some thoughts? Join the conversation tonight at 8pm ET on The Lady Party LIVE.