Can't We All Just Get Along: The Power of Connection 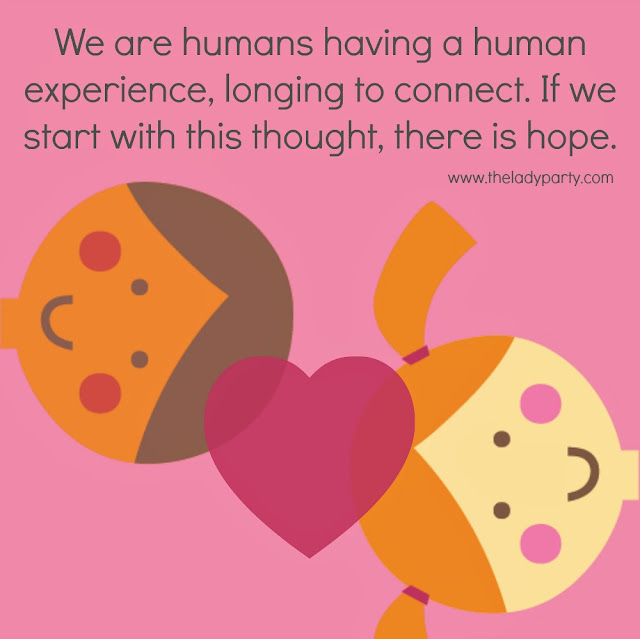 Some experts believe that humans are hard wired to create tribes and clans. This hard wiring is why people form groups and feel threatened by other groups. This may have been useful when competition for limited resources meant survival, but it's proven less so now that there is access to all that we need if not the impetus to provide it. The illusion of 'the other' is powerful, because it's primal. This makes it challenging in our modern age. It makes it difficult for people to see themselves as part of the human race first and foremost. It makes war, violence, racism, sexism, homophobia, and Xenophobia so prevalent and powerful. It makes peace, love, and understanding so difficult to achieve.

"Experiments conducted over many years by social psychologists have revealed how swiftly and decisively people divide into groups and then discriminate in favor of the one to which they belong. Even when the experimenters created the groups arbitrarily, prejudice quickly established itself. Whether groups played for pennies or were divided by their preference for some abstract painter over another, the participants always ranked the out-group below the in-group. They judged their “opponents” to be less likable, less fair, less trustworthy, less competent. The prejudices asserted themselves even when the subjects were told the in-groups and out-groups had been chosen arbitrarily." Newsweek, Biologist E.O. Wilson on Why Humans, Like Ants, Need a Tribe


We are humans having a human experience, longing to connect. If we start with this thought, there is hope. Even if people vote or pray or love or think differently, even if people look different, even if people come from somewhere different, they still want and need the same basic things: love, acceptance, security, opportunity, and understanding. We want and need the same basic things, but we see different pathways to achieving these thing. Conflict arises when we insist that everyone else see the world in the same way that we do. Conflict arises when we begin to see people not as people, but as ideas or skin colors or religious beliefs or sexual orientation or nationalities or political views. When we focus on our differences, we forget our commonalities.

Some people want power more than they want connection, and there's no way to sugar coat that. I have stared down the barrel of a gun and into the cold, dark, dead eyes of a person who wanted power more than connection. I have been assaulted and attacked. I have been abused and humiliated. These people did not want to connect with me. These people wanted to intimidate and harm me and in the process make themselves feel powerful. These people were not defined by their skin color or their ethnicity or their religion or their sexual orientation, though. They were defined by their lack of compassion and their insatiable need for power at all cost. When people do unconscionable things, they may use their religion, political views, ethnicity, or nationality as a rationale. This is a lie they tell themselves to excuse their behavior. There is no excuse for unconscionable actions. There is no rationale, because these things are irrational. Some people lack a conscience, but even good people can become irrational, violent, and aggressive when fed a steady diet of fear. Even good people can forget that they are humans having a human experience longing for connection.

Yesterday, I was attacked by a woman whom I do not know who was offended by my lack of compassion for sharing a picture of a chicken pot pie I baked for PI Day on my social media page. She asked me, "Do you not think about having compassion?" I responded, "Daily."

She then proceeded to lecture me on factory farms and the dairy industry and eating corpses of living things. I reminded her that plants were living things, with a consciousness that is real though different from ours. I asked her if she ate plants? She did not respond. I explained that I do think deeply about my footprint and how my choices impact other living things. I try to buy free range, grass fed, organic food so my impact on the environment is less violent, but I do eat meat. She ignored my response and doubled down on her lecture, because she didn't want to hear what I had to say. She was part of a group of people who don't eat meat or use animal products and in her mind, that makes her superior. She uses electricity, drives a car, uses a computer, has a cell phone, wears modern clothing, lives in the modern world and not in a yurt on a mountain where she lives off the grid and on the land. The things she does as a participant in the modern world have impact that is deadly to other organisms. When she eats a vegetable, she is also eating the corpse of a living thing.

We could have had a mindful conversation exchanging our views and thoughts. I could have told her about sobbing in my car last week when I saw a truck filled with chickens heading for slaughter. I could have explained that I'm finding it harder to eat meat these days, but I try at least to be mindful about what meat I consume and how it is raised and processed. She could have talked to me about why she's chosen not to eat meat and how that has positively impacted her life and her worldview. Instead, she shut me down and told me what she felt I needed to do. She made sweeping assumptions and assertions based on her own biases and agenda. Then she announced that she was leaving and would not be returning or talking with me further. Okay, then. We may have both walked away with insights and mutual understanding. However, she wasn't interested in insights, because her tribe was better than my tribe.

This seems to be the bulk of what happens on the internet. YOU ARE WRONG. I AM RIGHT. I AM YELLING AT YOU BECAUSE I DO NOT WANT TO HEAR YOU. ALL OF YOU PEOPLE THINK THE SAME WAY. Nothing about this is productive. Everyone seems incapable of bending, there is an increasingly aggressive demand that 'other people' buy into your agenda. There is a lot of shutting people up and shutting people down. When you shut other people down and refuse to listen to opposing views, you both lose. I think the digital reality has deepened our divides. It doesn't help that social media feeds are being manipulated to increase our division. It doesn't help that electronic communication makes it so much easier to speak without listening.

These divides existed before the internet, and it seemed as if they might be lessened by our ability to connect with so many other people. In some ways, I think they have, but others they have been exacerbated. I think we need more face to face connection and conversation. Electronic connection is a poor substitute for real connection. I think we start by shining the light on our shared humanity. I think we start by sharing our stories, listening respectfully, and seeking common ground. We can agree to disagree without attacking each other. Lecturing people doesn't change their hearts and minds, it shuts them off.

If you have not heard this story, it is fascinating. Derek Black, the son of a prominent white nationalist has completely rejected that messaging. Programming can be circumnavigated, it is possible to change hearts and minds. His mind was changed when he met people and made connections. He realized that 'those other people' were just people. This realization didn't come from lectures, it came from simple connection.

We may be hard wired to form tribes, but our hard wiring is not necessarily our destiny. If we widen our tribe to include everyone, we can use that hard wiring to usher in a new level of connection and understanding. There is no other, there is only us. We are humans having a human experience, longing to connect. If we start with this thought, there is hope.