The Lady Party LIVE and More Fun with Russia 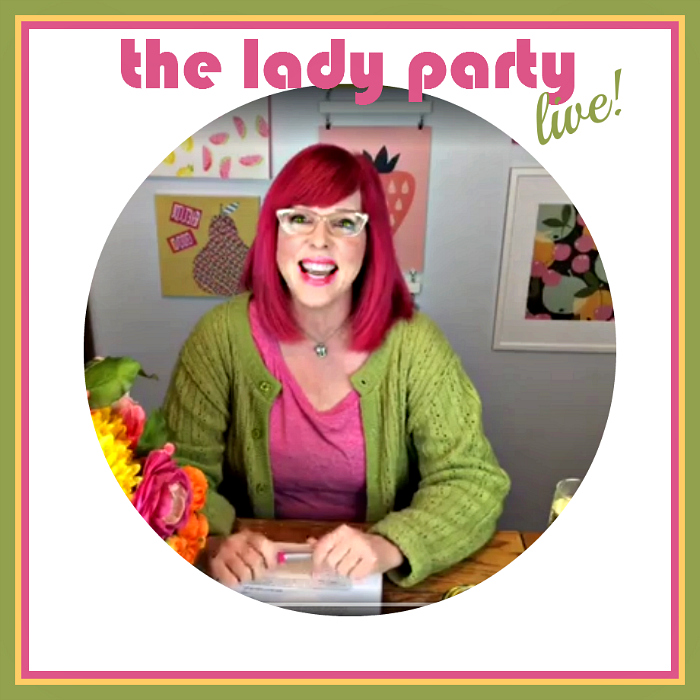 Happy ushering in of sandals and sunshine!

Well, kinda happy. If you can ignore the whole Russia Thing. Which this blogger and our intelligence agencies can't.

Read on, or skip to the video below and pour up a cup of denial topped with a heady mix of willful ignorance and cognitive dissonance. Cheers, darling.

We begin with Comey's testimony. The FBI is, indeed, investigating ties between 45's campaign and Russia. Let that sink in and soak for a moment.

Let's review the actual facts, shall we? Obama did not order surveillance of 45. Bigfoot is not real. The Birth Certificate was real. Milli Vanilli can't sing. Alternative facts are not facts. Putin is not our friend.

Our Twitterer-in-Chief is the crazy drunk uncle at the holiday table. There goes Uncle Donny again, yelling conspiracy theory nonsense while the rest of us try to enjoy our turkey and Stove Top stuffing.

For the record, I am living for the day when "the president tweeted" is never uttered again on the evening news. Why does this undisciplined, delusional man still have his unsecured cell phone?

We've talked Russia and the election here, here, and here. It doesn't take a PhD in political science to connect the dots between Russia and 45. His own son made it clear in this quote, which we keep quoting because for FUCK'S SAKE FOLKS, Don Jr. said it out loud, "We see a lot of money pouring in from Russia. There's indeed a lot of money coming for new-builds and resale reflecting a trend in the Russian economy and, of course, the weak dollar versus the ruble." 45 made it even more clear in this quote, which we also shared here because FOR FUCK'S SAKE, he said it out loud, "The Russian market is attracted to me. I have a great relationship with many Russians, and almost all of the oligarchs were in the room.”

And then there's this CNN article, further articulating 45's ties to Russia.

Nothing to see here, people. 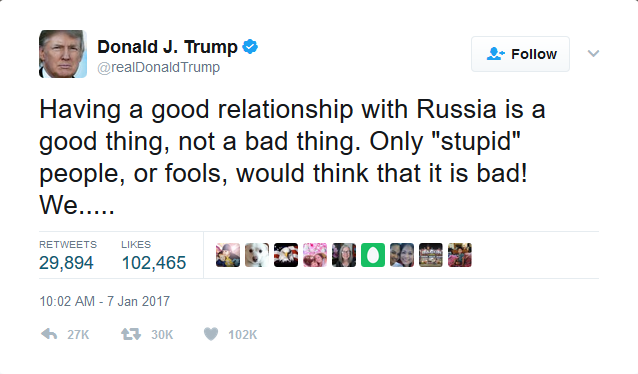 I don't know where this is heading, but it's looking more like the Titanic every day, including the refusal of the first class passengers to go down with the ship. We see you blowing up that life raft, Ryan, Pence, Chaffitz, Nunes, and McConnell. Put that down and DO YOUR JOBS. It's not the leaks, It's Russia, Stupid.

Look out for those meddling kids, because they're coming for you, too.

The cherry on the top of this not so tasty beverage was the oddly (or perhaps boldly) timed announcement that special friend of Russia Rex Tillerson is skipping the NATO meeting so he can go toss back a few vodkas with his pal Vlad. If that doesn't curl your toes, you're not paying attention.

Is it just me, or has every thriller and spy movie EVER had a Russian bad guy? да.

Has no one who voted red seen The Manchurian Candidate?

Is the Cambridge Analytica propaganda machine really that effective?

Who will save us from the Cyber Wars?

I don't have the answers. I do have questions. Thankfully, so do our intelligence agencies and our fearless reporters. Keep digging, folks! Meanwhile, we'll keep dipping our chip into the Borscht bowl while this American tragedy unfolds.

If you'd like a small distraction from the end of the world as we know it, here's last week's edition of The Lady Party LIVE! I read a story about the year that I had free lunches and the time I accidentally killed the family pet, we talk about compassion, and then my daughter decided to pop on the internet and kicked me off of the WiFi. It's a veritable pu pu platter of St. Paddy's Day fun with a surprise lack of an ending.