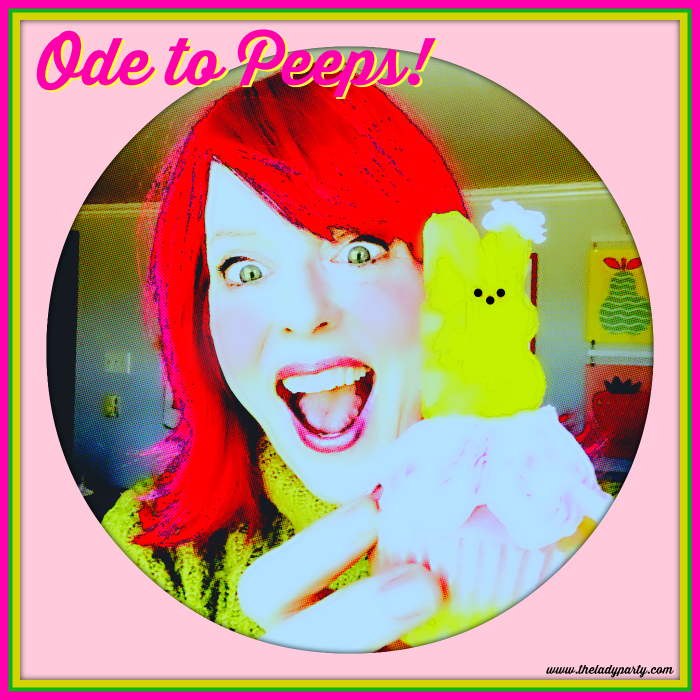 In case you have not received the memo, I have a thing for Peeps. Peeps candies, not creepy peeps, though I do like my peeps. Keep your creepy peeps to yourself, and I'll keep my Peeps candies for myself.

This is deteriorating rapidly, isn't it?

Let me try, again. I am a huge fan of the sparkling sugar coated marshmallow happiness of Peeps candies. Perhaps you can sense this from the maniacal photo above. The photo is a bit of an exaggeration, because I'm not maniacal about Peeps. 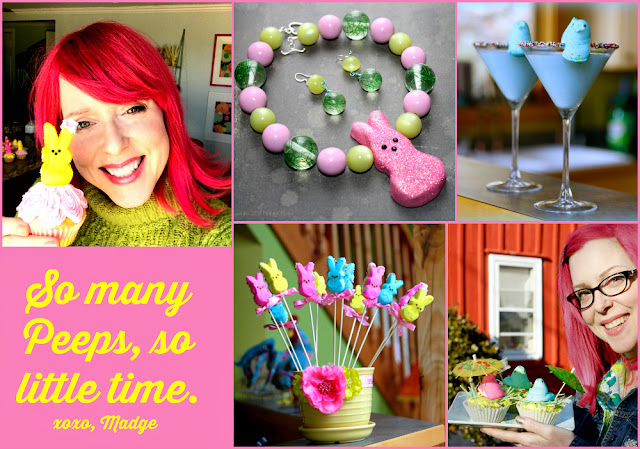 I have crafted all manner of Peeps themed creations over the years. From my first epic Peeps centerpiece fail, to my Peeps centerpiece redemption and the many cocktails, cupcakes, and crafts that followed, I find them endlessly inspiring. Even if you don't like to eat them, it's hard to deny that they are cheerful.

Much like politics, Peeps are polarizing. People either love them or hate them. People who hate them really hate them. They get very upset about it. This makes me question their overall happiness level. What kind of a person gets upset over colorful marshmallow candy? A grumpy person, that's who. If you hate Peeps, I'm not sure if we can be friends. Perhaps you might find your solace in a bag of baked beans or a box of thumbtacks.

Those who love them either love them fresh from the package, squishy soft, or they love to let them sit out and harden to a more chewy consistency. They will wax poetic about either approach. People who love Peeps love to discuss the manner in which they love to consume them. I am of the soft, squishy side of the Peeps equation. Though, there are considerable merits to both approaches.

I'm not alone in my Peeps obsession. There are lots of Peeps Lovers out there. Every year about a week before Easter, you'll be hard pressed to find a single Peep left standing at the stores. There are peeps who like to cook with Peeps, peeps who like to craft with Peeps, the Washington Post's annual Peeps diorama contest, peeps who cover cars with Peeps, there are even peeps who conduct science experiments with Peeps. I have been tagged in this Peeps covered dress dozens of times over the years. For the record, though adorable, I would not want to wear a dress made of Peeps anymore than I want to wear a dress made of meat. I would, however, make and wear Peeps themed jewelry, but not out of actual Peeps.

If loving Peeps is wrong, I don't want to be right. Pour me a Peeps-tini and leave me to my sparkling sugar coated marshmallow confection alcohol soaked delusions.


An Ode to Peeps

Oh, Peeps, sweet Peeps,
You make me smile.
You're tasty, cute,
And versatile.

Oh, Peeps, sweet Peeps,
You happy treat.
So glad am I,
Each time we meet.

Oh, Peeps, sweet Peeps,
You bring such glee.
Don't like them?
Good, that's more for me!