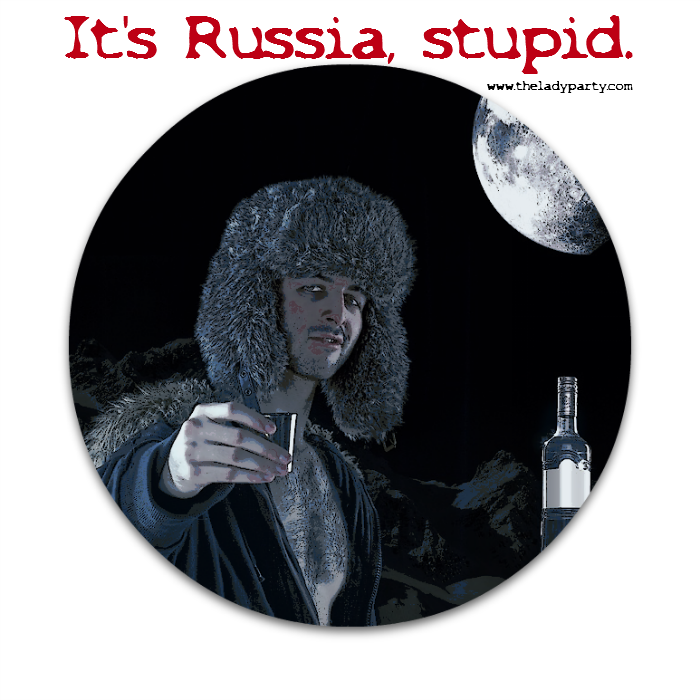 For months now, we've been talking about the Russian influence in our election. This is our third foray into the hot pink frothy liquid of BorschtGate or is it RussiaGate or PutinGate? They really need an official name for this debacle. No matter what they call it, it's Russia, stupid.

The mere fact that Russia directly interfered in our election through a series of leaks, fake news stories, direct campaign communications, and targeted propaganda to promote one candidate and degrade another should have every citizen concerned. The fact that the favored candidate openly encouraged the leaks and praised Putin should be enough to warrant investigation. Yet, oddly enough, one quarter of the citizens of this post Cold War nation seem to be fine with Vladimir Putin and Russia manipulating the political landscape. What's the big deal? What, indeed. Old Ronnie Reagan must be rolling over in his grave.

“The Russian market is attracted to me,” Trump told Real Estate Weekly. “I have a great relationship with many Russians, and almost all of the oligarchs were in the room.” Trump, 2013


The leaks, the contacts, the business deals, the threads that tie the Trump organization to Russia going back to the 1990s, they've been there all along in plain sight. The collusion is obvious to anyone bothering to pay attention. If the tables were turned and this was a Democratic president, you know damn well we'd have a flurry of investigations and an endless stream of lamentations and castigations. Yet, the GOP made a deal with the devil and opted out of diving deep so they could busy themselves with passing a flurry of legislation designed to privatize our government and appease their corporate overlords. After all, corporations owe no fealty to anyone beyond their stockholders. The details of who is in charge of what government matter only in the manner in which they support a positive bottom line. Just ask Trump's pals Tillerson, Flynn, Page, Stein, Manafort, and Ross.

"Putin has big plans for Russia. He wants to edge out its neighbors so that Russia can dominate oil supplies to all of Europe," Trump said. "I respect Putin and Russians but cannot believe our leader (Obama) allows them to get away with so much...Hats off to the Russians." Trump, 2011


As for Senator Sessions, one can only hope that lying under oath undoes this not so good old boy and sends him back to the Jim Crow south the rest of us left fading into the rear view mirror years ago. It is a thing of wonder, though, how he dodged the question of communicating with Russia with a bit of legalese. He did not meet "with any Russian officials to discuss issues of the campaign." Note the slippery specificity of this statement. Did he or didn't he? How would we know? We weren't there. However, the prevailing winds surrounding the Trump campaign suggest they weren't talking about Vodka. The bottom line is that he was a member of the campaign that was colluding with Russia. Regardless of what he discussed with the ambassador, he lied under oath about having those discussions. This isn't a partisan witch hunt, though if it were we've surely seen plenty of that from the GOP over the years. This is a serious issue that defies partisan politics and threatens the veracity of our elections.

Sessions must recuse himself and I believe he should step down. Linguistic gymnastics aside, we didn't fall off of the beet wagon yesterday, Senator. You lied under oath and that is not acceptable for the Attorney General of the United States of America. Period. 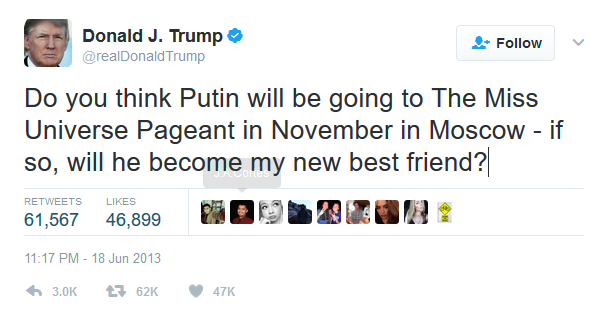 "It is always a great honor to be so nicely complimented by a man so highly respected within his own country and beyond," Trump said in a statement. "I have always felt that Russia and the United States should be able to work well with each other towards defeating terrorism and restoring world peace, not to mention trade and all of the other benefits derived from mutual respect." Trump, 2015


Follow the money, folks. It's all about the oil, and the art of the deal. It's about misdirection and distraction. It's about everyone getting a piece of the pie that divvies up the profits at the expense of the American people. Talk about taxation without representation. No, really. Let's talk about it.

This is not normal. This is not acceptable. This Manchurian Candidate and his cadre of Kremlin cronies need a one way ticket on the next train to Siberia. That includes Pence, Ryan, McConnell and the rest of these traitors who knew damn well what was going on and did nothing.

It's Russia, stupid. Stop fucking around.