Updates from The Resistance 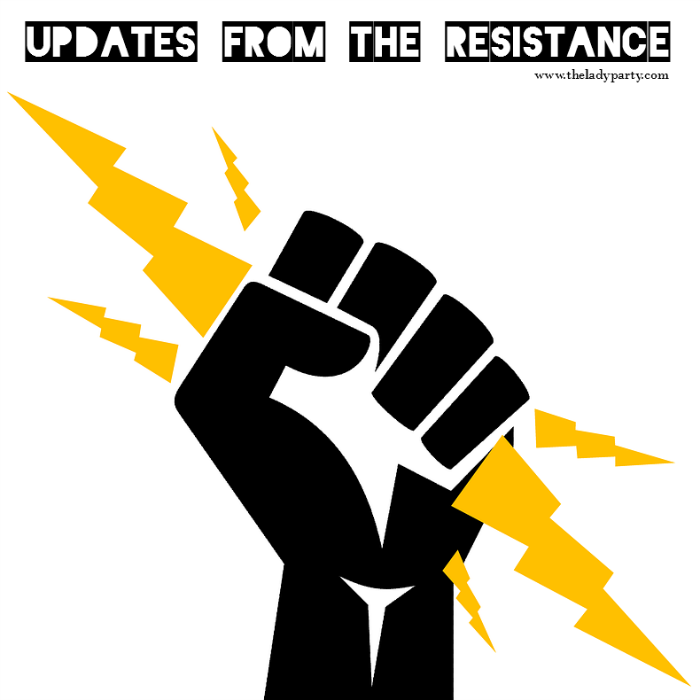 Welcome to Updates from The Resistance!


With each passing day overflowing with unbelievable absurdities from the hallowed halls of Washington DC, I found my outrage expanding beyond imaginable proportions. It's beyond maddening watching elected officials ignore the fervent pleas of their constituents in favor of their corporate donors. Money talks and bullshit walks with an increasing lack of shame. They're not even pretending to hide it anymore, why bother? Think I'm exaggerating? Try traversing the social media feeds of some of these corporate lackeys as they shut down dissent in increasingly combative, insincere, and disdainful ways. Now that we've entered the era of no civility being propelled by alternative facts and a blatant disregard for justice, fairness, truth, or equality, elected officials believe that they can do what they please. They've gerrymandered and voter suppressed in a targeted effort to sidestep and roundly ignore the will of the people. So, in a sense, they can do what they please. Now that corporations can freely donate millions to campaigns, they are drowning out the voice of the American people. We were never a true democracy, but we were a republic, now we've become an oligarchy and we're rapidly morphing into a kleptocracy. Open up your bags, well heeled ladies and gents, it's time for unfettered profiteering at the expense of the willfully ignorant American taxpayer.

"If ye love wealth greater than liberty, the tranquility of servitude greater than the animating contest for freedom, go home from us in peace. We seek not your counsel, nor your arms. Crouch down and lick the hand that feeds you; and may posterity forget that ye were our countrymen." Samuel Adams


That's the saddest part, to me. The most absurd aspect of the absurdity, is that millions of people were too lazy, too stubborn or too distracted to bother to pay attention. Millions of people have been misled by the right wing arm of the corporate media into voting against their own interests. Millions of people have been blinded by the carrots on sticks dangled in front of their fearful gazes, carrots that they will never taste. Carrots made of toxic rhetoric and hateful agendas. How else can one explain the unparalleled ascendance of a man so entirely unfit to lead our country in every way imaginable? How else can we fathom how a man who spews racist epithets, joyfully describes sexual assault as his fame card given right, mocks the disabled, throws temper tantrums on Twitter, threatens his detractors, and signs Executive Orders he has not even bothered to read? Of course, he also had the considerable assistance of an unfriendly foreign government, to a degree we may never know since the people who are charged with protecting us from this kind of thing have no impetus to investigate.

"Foreign influence is truly the Grecian horse to a republic. We cannot be too careful to exclude its influence." Alexander Hamilton


It's not just conservatives who were misled, one wonders why the Green Party presidential candidate was in attendance at this Russian media event with our new National Security Advisor at a table with Vladimir Putin. Curiouser and curiouser...

Is it possible the avalanche of Russian leaks designed to discredit the Democratic nominee may have been further empowered by the steadfast refusal of support from the aforementioned candidate? Who's to say? Yet...

Meanwhile, our country has been purchased by corporate interests and the takeover is being completed while we become further and further divided and distracted. It's outrageous. I keep trying to speak up and speak out, but with so many voices and so many messages, it's just so much noise. It's noise that is either reaching the choir or being deflected by cognitive dissonance.


My one small voice, my one small light, my steadfast refusal to go gentle into that good night will carry on, undeterred. I will be fueled in part by outrage, but more importantly by my deepest belief that the truth will out, justice will prevail, and love will trump hate. That may be naivite, after all history shows that evil rules with an iron fist and in ruling can afflict all manner of atrocity with the support of those who have been blinded by fear. Still, I believe that fear is powerful, but love is stronger. I also believe that it is my duty as a citizen of this free country to do everything in my power to fight for that freedom.

"If ever time should come, when vain and aspiring men shall possess the highest seats in Government, our country will stand in need of its experienced patriots to prevent its ruin." Samuel Adams