My Religion Is Kindness 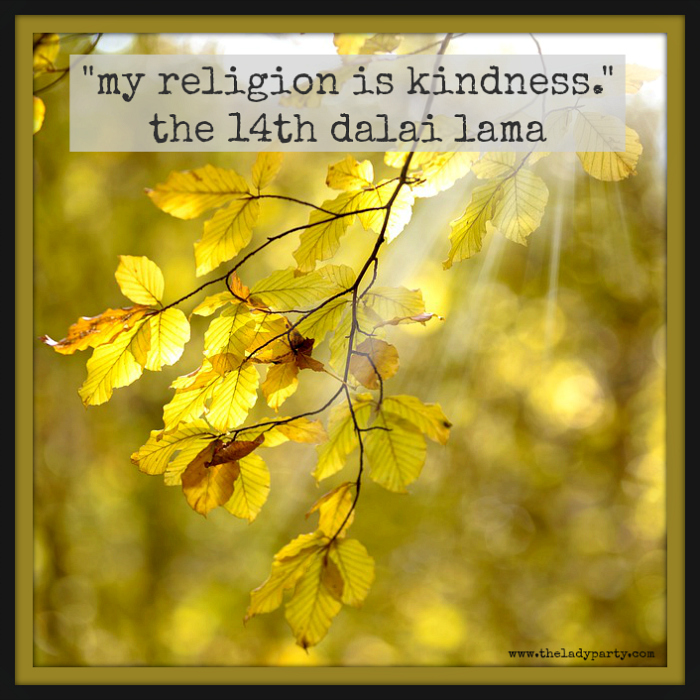 My relationship with divinity as I experience it is personal and private and it is not defined by dogma or selectively edited and selectively interpreted ancient texts that I believe no longer apply to the world in which we live. I have grown weary of religious folks from various and sundry religious faiths telling me how to live my life. More than that, though, I have grown weary of them demanding that science and education and business and laws and other people all kowtow to their limited interpretation of their version of the holy text of the faith they insist is the one true faith. One man's Sharia Law is another man's Religious Freedom Act. I don't like either and I don't believe they have a place in the government of a free society.

There is something in our government called the separation of church and state. It's there for a very good reason. It's there to prevent any one religion or any one sect of any one religion from defining our society. There are too many sects and too many interpretations and too many people of too many faiths to make any laws that reflect everyone's beliefs equally. By keeping church and state separated, we prevent any one sect of any one church from ruling with an iron fist and we prevent the state from interfering in the free practice of religion. We also prevent different sects of different religions from fighting against each other for control of our government.

The founding fathers were wise enough to recognize that the separation of church and state was of tantamount importance. They wrote about it extensively. This is not a Christian nation and it never was, by design. They may have been Christians, but they did not design a Christian government. Don't just take my word for it, let's hear it from the boys.

"I beg you will be persuaded, that no one would be more zealous than myself to establish effectual barriers against the horrors of spiritual tyranny, and every species of religious persecution.” George Washington

"I contemplate with sovereign reverence that act of the whole American people which declared that their legislature should make no law respecting an establishment of religion, or prohibit the free exercise thereof, thus building a wall of separation between church and state.” Thomas Jefferson

"In every country and in every age, the priest has been hostile to liberty. He is always in alliance with the despot, abetting his abuses in return for protection to his own. It is error alone that needs the support of government. Truth can stand by itself.” Thomas Jefferson

"The government of the United States is not, in any sense, founded on the Christian religion.” John Adams


Yet, here we are with the folks in charge of our government being driven by religious fundamentalists preparing to pass all manner of discriminatory religiously based laws that will directly affect everyone. Even though the people pressing for these laws are in the statistical minority, they have hijacked representation all the way up to the highest levels of our government. The minority of people are shaping policy that allows them to openly discriminate against the majority of other people. I'm not making the minority part up either, because churches are literally going out of business. Church attendance is continuing to decline. It doesn't matter that the very act of judging other people is in direct opposition to the teachings of the Messiah they claim to follow, because the fundamentalists pick and choose the scripture that conforms to their fears and supports their bigotry. Oh sure, we eat shellfish, wear jewelry, fashion and make-up, go out in public when menstruating, and wear clothing woven of two materials, but that's different. Is it though? Are those abominations okay because times have changed but the other ones are not okay? Are a few lines from Leviticus enough to excuse blatant discrimination and the denial of basic rights to entire segments of the population? Fundamentalists cloak themselves in their beliefs as if that makes them better than the rest of us and they believe in their heart of hearts that it does. That's the scariest part.

For the record, I don't care what religion it is, I am equally over all of them. I just can't get with a program that excludes people because they think, pray, love, or live differently. I think the world would be fundamentally better if we all just practiced kindness, compassion, and unconditional love. If we did that all of the worst things people do to each other would be obsolete. I also think the world would be fundamentally better if governments were guided by logic, reason, justice, equality, and fairness. However, I don't get to decide that for the world or for the government, but the founding fathers decided that we should keep religion and government separated. I'm with them on that 100%.


Amendment I
Constitution of the United States 1789

Congress shall make no law respecting an establishment of religion, or prohibiting the free exercise thereof; or abridging the freedom of speech, or of the press; or the right of the people peaceably to assemble, and to petition the Government for a redress of grievances.

That's how I feel. You are free to feel differently. I would fight for your freedom to feel differently. and to express your feelings freely. The 1st Amendment affords you and me that right. However, I will also continue to fight for our government to be free from the establishment of religion and to refrain from prohibiting the free exercise thereof (or the free lack of exercise thereof), thus building a separation between church and state.

And as for my religion? It's pretty simple. The 14th Dalai Lama summed it up perfectly, "My religion is kindness."