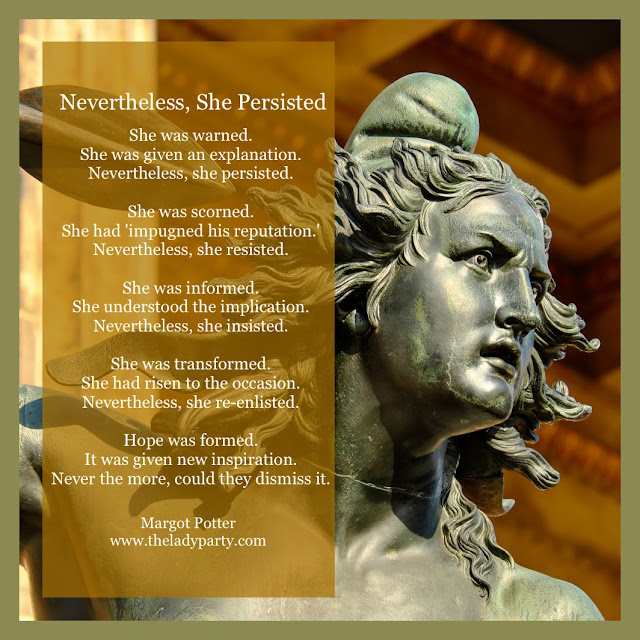 She was given an explanation.

Her-story is the story of every woman and everyone who ever defied the status quo and particularly anyone who ever dared to speak truth to power when it meant risking security. It is persistence that drives forward momentum. Without it, we regress. With it, we progress. Yet, men have been telling women and minorities to sit down and shut up for ages, and women and minorities have been standing up and speaking out in defiance for just as long. Same as it ever was, but one can only hope that it is not the same as it will ever be. As long as people keep resisting, insisting, and persisting the tides will continue to turn. It may be a long row to hoe, but we will persist until the patriarchy and all that it stands for is his-tory.

It did not escape notice that four white male senators were allowed to read the letter written by Coretta Scott King (which was prevented from inclusion in the Congressional Record by integration foe Strom Thurmond three decades ago) without being silenced. The public rebuke of Senator Elizabeth Warren, a brilliant, tenacious, accomplished woman, ensured that the letter would become part of the record. It also ensured that the letter would go viral on social media. They tried to put her in her place, but they forgot that a woman's place is in the Senate, the House, and The White House. Racism, sexism, Xenophobia, homophobia, any and all forms of discrimination and the hateful rhetoric and violent actions they inspire belong in the dark and dusty archives of the shameful past. Those who align themselves with these archaic attitudes will find themselves on the wrong side of history.

"Women, if the soul of the nation is to be saved, I believe that you must become its soul." Coretta Scott King


Senator Warren finds herself on the right side of her-story. For that, we give her a standing ovation. Then we get back up and carry on fighting the good fight, while remaining good.

As for those who would tell us to be quiet, I offer this reminder. You may be able to silence some of us, but you cannot silence all of us. We will resist, insist, and persist.

Mitch, you ain't heard nothin' yet. HEAR US ROAR.