Election 2016: From Russia, With Love 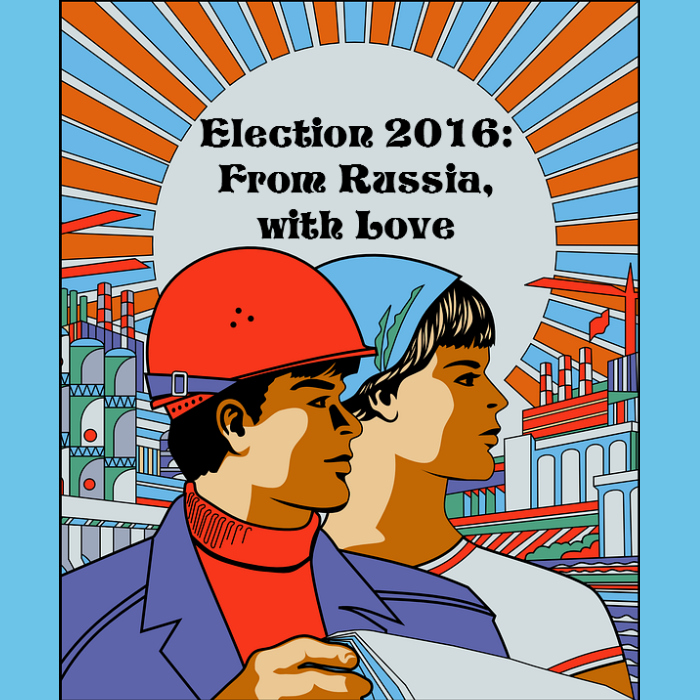 The borscht thickens, folks. We're diving back into the ever evolving story of Election 2016: From Russia, with Love.

General "Lock her Up" Flynn has left the building after hearing the obligatory, "You're fired" or submitting a resignation. Six of one...half a dozen of obviously he was fired.

Yet, one wonders why Sean Spicy Spicer told us a different story. The tune keeps changing, but the song is still off key.

Then there's the matter of Flynn's speech from this past summer:

"...because if I — a guy who knows this business — if I did a tenth of what she did, I would be in jail today. So … So … Crooked Hillary Clinton, leave this race now."

Now that you've resigned, feel free to turn yourself in, General. It's clear you've done far more than a tenth of what she did. Emails, schmemails.

There's a concerted effort on the part of Team Trump led by an increasingly robotic Kellyanne CONway to sweep the remaining residue under the carpet, but this residue is far too big to be shoved under a rug. They may be moving on, but we're not.

How deep does the collusion run and if it runs as deep as it is starting to look, who will be left in the wake of the unfolding scandal? Does anyone believe that VP Pence was kept in the dark while everyone around him knew about Flynn? Seriously?

If he was uninformed of this key piece of information, that's some serious dysfunction. If he wasn't...does anyone believe that he wasn't? Still, let's just say for kicks that he was kept in the dark like a mushroom by the shadow president, that's beyond the pale. The man who is a heartbeat away from the presidency needs to be in the loop. If he's out of the loop, where is he spending his days and what is he doing, exactly?

And who was directing then private citizen Flynn to contact Russian intelligence?

According to the steady steam of leaks, at least THREE Trump campaign insiders were involved in constant communications with Russian intelligence during the campaign.

"Sergei A. Ryabkov, the deputy Russian foreign minister, said “there were contacts” during the campaign between Russian officials and Mr. Trump’s team. “Obviously, we know most of the people from his entourage,” Mr. Ryabkov told Russia’s Interfax news agency." NYT

Carter Page, Paul Manafort, and General Flynn... Who's next?

Trump has deep ties to Russia that go back many years. Don't believe me? Take it from Don, Jr. in 2008, "We see a lot of money pouring in from Russia." It's not a huge stretch to believe that his loyalties run to those who hold his purse strings.

And we have not forgotten Sexy Rexy, special friend to Putin and Russia, former Exxon CEO, and big oil Lobbyist. Rex dodged and weaved his way through the sanctions questions at his Secretary of State hearings, but the paper trail does not lie.

Meanwhile, The House Ways and Means committee led by Chaffetz refuses to request the Trump taxes. Chaffetz also refuses to investigate Flynn. He is investigating a cartoon character, however.

Speaking of cartoon characters, rumor has it that Trump is vetting Boris Badenov for National Security Advisor. That is, if you believe rumors started by this blogger. Perhaps Chaffetz should look into this further...

"Pay no attention to the man in the Moose's butt." Boris Badenov

Besides, according to the Twitterer-in-chief, it's Hillary's fault. I'd laugh, but this isn't even funny anymore.

Personally, I think we need an independent counsel to investigate the GOP. That means Ryan, Pence, McConnell and the rest need to recuse themselves from involvement in the investigations. I don't for a moment believe they were clueless. Information from the Russian email hacks was integral in political races all over the country in the last election. Paul Ryan's Super Pac The Congressional Leadership Fund used information from Guccifer 2.0 in a coordinated effort to undermine Democratic candidates.

Yes, folks, instead of investigating the leaks, the GOP spread them around like fertilizer.

And therein lies the source of the stink. The folks who refused to do anything for 8 years are in charge of investigating themselves. We all know how well they activate when they lack motivation. It appears their lack of motivation this time may stem from self preservation.


If the GOP is not going to investigate the White House or themselves for crimes of high treason, is it possible for the American people to form a class action lawsuit against this coordinated effort to assist a foreign government in undermining our election? Also, are Rocky, Bulwinkle, and Associates available?