Betsy Devos' and the GOPs War on Education 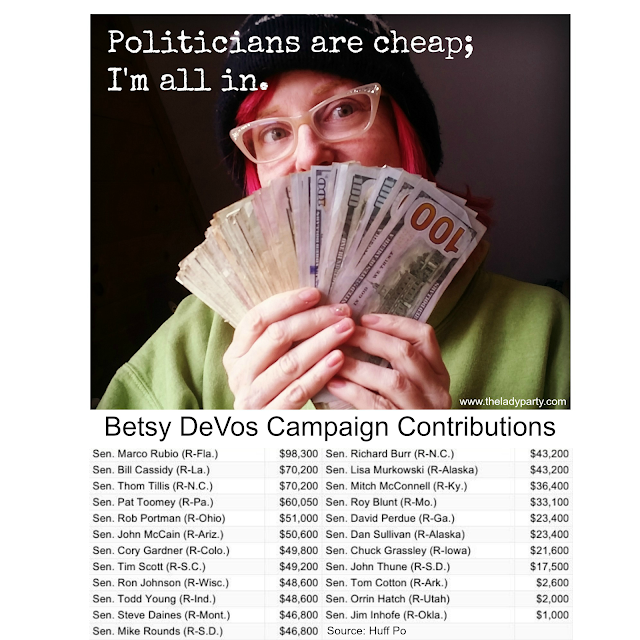 Chaos is a game plan. By creating constant chaos,  you create confusion. By creating confusion, you create information fatigue. People become so exhausted from the constant barrage of increasingly disturbing news, that what was once completely unacceptable starts to feel normal. This is the plan, but it is only effective if we acquiesce.

Yesterday, two things happened that are worth our attention. Betsy DeVos, an Amway fortune heir who married another billionaire was confirmed by the US Senate (in a record breaking tied vote broken by VP Mike Pence) to run the Department of Education. Soon after a bill was presented on the House floor to terminate the US Department of Education. The one thing was so outrageous, so completely mind blowing, so over the top insane that the other thing got buried in the noise. They are both outrageous, mind blowing, and over the top. Betsy DeVos and the GOPs War on Education is shaping up to be one epic battle.

"I have decided, however, to stop taking offense at the suggestion that we are buying influence. Now I simply concede the point. They are right. We do expect some things in return." Betsy DeVos

It has eight words: "The Department of Education shall terminate on December 31, 2018."

THAT is the story from yesterday that got buried under the Three Ring Circus of the DeVos confirmation. That does not mean the DeVos confirmation is not worthy of your scrutiny. It does mean that the plot thickens. Insert descending trombone notes here. By giving her this job, she is being elevated and empowered to work in the private sector education realm more effectively. She can inflict damage during her tenure and affect more after she departs. She can assist at the highest levels in the systematic dismantling of our public education system. She can help to make sure that only the wealthiest children have access to quality education and that all education can be designed for profit. That's the real bottom line.

Here is the skinny on Betsy DeVos:
The big story yesterday was that the House will be voting on advancing a bill to eliminate the US Department of Education. It was buried under the adjunct story, which was also big. The adjunct story is that a billionaire, who is part of a family that has spent hundreds of millions of dollars to influence government policy and is the sister of the founder of Blackwater, was given a cabinet position for which she is entirely unqualified. The most important part of that adjunct story is that this billionaire has a clear agenda to dismantle public schools, implement for profit private schools, promote her religious agenda in these private schools without having to be fettered by the separation of church, and to add more money to her considerable coffers. Her ability to do so, and to profiteer in other ways related to the business of education, will be bolstered by this position.

And that should burn the ever living hell out of your biscuits, folks.