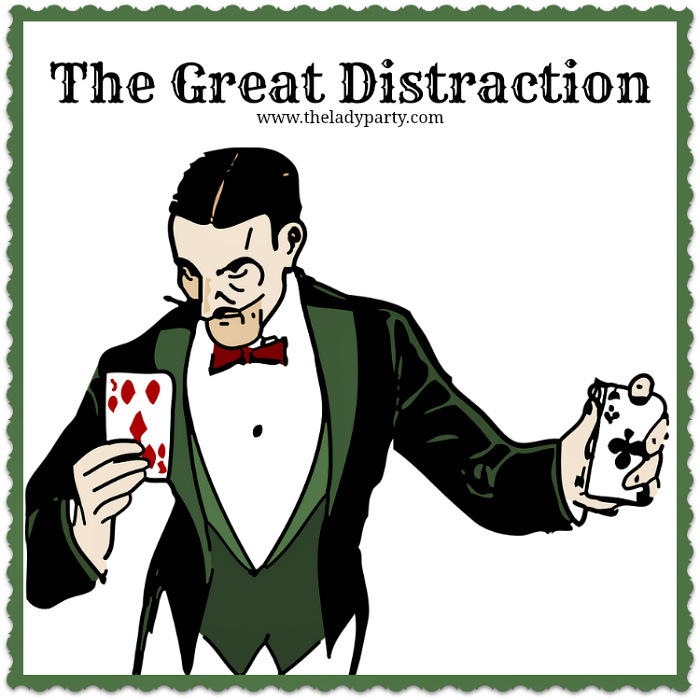 Today we're talking about misdirection. This is what magician's do when performing magic tricks so that the audience does not see what they're really doing. This is what is happening right now in DC. The Distractor-in-Chief and his assistants Bannon and Conway are busy crafting up a steady stream of misdirection to keep the press and the general public constantly distracted. While we retweet, repost, respond, rant, rave, and act as if things that are outrageous, shameful, and abnormal deserve our attention, they are busy unraveling the very fabric of our society. More than that, and more importantly, they are poised to misdirect our tax dollars into the pockets of profiteers. Follow the money, always, because that's what they don't want you to see. Pay close attention to the men behind the curtain.


“Power is in tearing human minds to pieces and putting them together again in new shapes of your own choosing.” Orwell, 1984


If you have not read George Orwell's 1984 recently, this is a good time for a refresher. It's heading for the non-fiction section as I type. In 1984 the government invents a language called 'Newspeak', which is a highly simplified version of the English language designed to eradicate freedom of thought. By dumbing down language, editing history, destroying anything that contradicts the new messaging, in essence rewriting reality, the people are forced into compliance. The truth loses all meaning. To question the government is to be guilty of thoughtcrime against Big Brother and the party. And it's important to note that Big Brother is already here, we are all of us under constant surveillance. Cell phones, computers, social media, smart TVs, Alexa, Siri, cameras in every public place...we've given away our privacy willingly and without much thought about the seriousness of the consequences.

"It's a beautiful thing, the destruction of words." Orwell, 1984


Our newborn Ministry of Truth is busy preparing their playbook of #alternativefacts as I type. The game plan is to create distraction, confusion, chaos, and division. Lie so often and with such conviction that the truth loses all meaning. Just as Ringling Brothers closes, the tent is being raised on the #worstcircusever. Coincidence? I think not. Step right up, folks, and see the wonders of the systematic destruction of the great republic of the United States! Watch the sideshow while we divide and conquer, turn friends into enemies, convince people to vote away their rights as we hand their tax dollars to the 1%. It's the best, big league, believe me!

“Don’t you see that the whole aim of Newspeak is to narrow the range of thought? In the end we shall make thoughtcrime literally impossible, because there will be no words in which to express it.” Orwell, 1984


But wait, there's more! We're bringing jobs back, shitty jobs in rusted out factories that pay less than the current minimum wage so we can make cheap crap for the emerging middle classes in other countries! We're taking away healthcare, because if you die we can always get another worker! We're dismantling education and rolling back labor laws so we can get those kids to work! We're taking away reproductive access because we need more factory workers with nimble fingers! We're taking away women's rights, civil rights, gay rights, worker's rights, human rights! Watch us roll back regulations that keep the air, water, and land contamination free! Cheer as we turn national parks into oil fields and shovel Native American sacred lands to the insatiable jaws of the fossil fuel monster!

“We know that no one ever seizes power with the intention of relinquishing it.” Orwell, 1984


Don't get angry, get motivated. Don't be distracted by the #worstcircusever. They want you to pay attention to their sideshow, don't do it. Don't give it any attention, energy, or thought. Don't let lies and misdirection make you lose your humanity, compassion, dignity, and sanity. Remember that there is no other, there is only US. Stay vigilant, stay diligent, stay focused, stay kind.

"In a time of universal deceit, telling the truth becomes a revolutionary act." Orwell, 1984