Rejecting the Politics of Fear 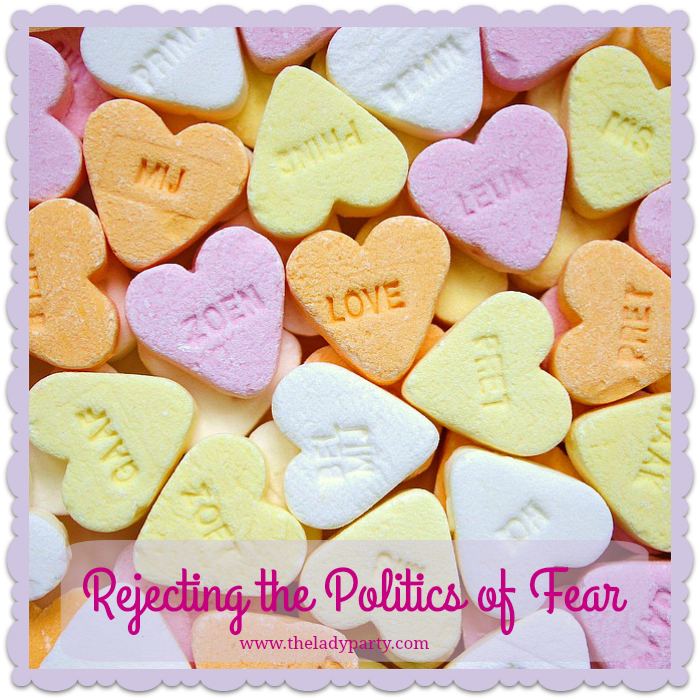 Yesterday I talked about focus, and today I'm giving it a more concrete spin. Is that a thing, concrete spin? Well, if it isn't it is now. If #alternativefacts can be a thing, #concretespin can be one. Amirite? But I digress, which is sad since I just started this essay. Yesterday two things happened that started to send me in the wrong direction. First, there was a ridiculous social media post from an angry yarn shop lady who was obviously baiting knitters into an argument so she could get some free press. It worked. Look, I'm talking about her now. C'mon people, stop falling for this crap. She's just taking a page from the DJT playbook. Take one from Michell's playbook, go high. Ignore her desperate plea for attention.

Secondly, I stumbled on a post with comments from old friends from high school in which they started by commenting on Madonna's speech and progressed to calling the women who marched on DC this past week witches, bad parents, and terrible role models. I have already addressed Madonna's comments here. She speaks for her. She was speaking about what she thought about doing theoretically, which is a bit different from talking about what you've actually done. Their moral outrage was interesting, all things considered. Somehow Madonna's remarks were outrageous and DJTs remarks and actions excusable. Cognitive dissonance, much? I almost commented, but decided to refrain. There would have been no point in stating the obvious, pointing out that I was their classmate and friend and they were talking about me. If they wish to think that I'm a witch, bad parent, and terrible role model for marching for equal rights, that's their prerogative. I will say, however, that I'm not the parent spewing vitriol online. I refuse to see the world in terms of us and them. That's a distraction. I may not agree with these people politically, but I don't disparage them personally. Perhaps by example, I might enlighten them or at the very least help them elevate the discourse. Or not, whatever. They can believe what they choose, it doesn't make it true.

Thirdly, another friend said she is deleting anyone who uses profanity to make a point. We are really getting into the muckity muck aren't we? Four letters words do not offend me, hateful rhetoric offends me. Racism, sexism, homophobia, xenophobia, and persecuting people because of their faith offend me. Threatening First Amendment rights offends me. Taking away my access to health insurance offends me. A president who lies "big league" without compunction who is surrounded by a host of sycophants who are so power hungry and desperate they feed and repeat his lies offends me. Torture offends me. Kowtowing to Big Oil offends me. Destroying the environment offends me. Russian interference in our election offends me. If my profanity offends, feel free to unfriend, for fuck's sake. I'm not going to make it through the next four years without the judicious smattering of juicy expletives.

And as Ellen says, "Back to my loving place."

What is saddest to me is how deeply divided we have become by the politics of fear. The question is, how do we find commonality so we can keep striving for unity? That's the challenge. That's what we will be seeking for the next four years. That is what I mourned the most on November 9th, the loss of what remained of the thin veer of civility. If any of the folks on that thread about the march are reading this post, let me challenge you to rise to the occasion. I am not the enemy and neither are you. Please don't lose sight of your humanity, of basic decency, of kindness. These are the things our children need to see. Teaching them these values is what makes good parents and good role models. Teaching them to disparage people with whom they disagree does not.

I am going to stay focused on seeking connection. We are in this together, and I refuse to be divided by the politics of fear.

“There is no illusion greater than fear.”  Lao Tzu