The War on Yule 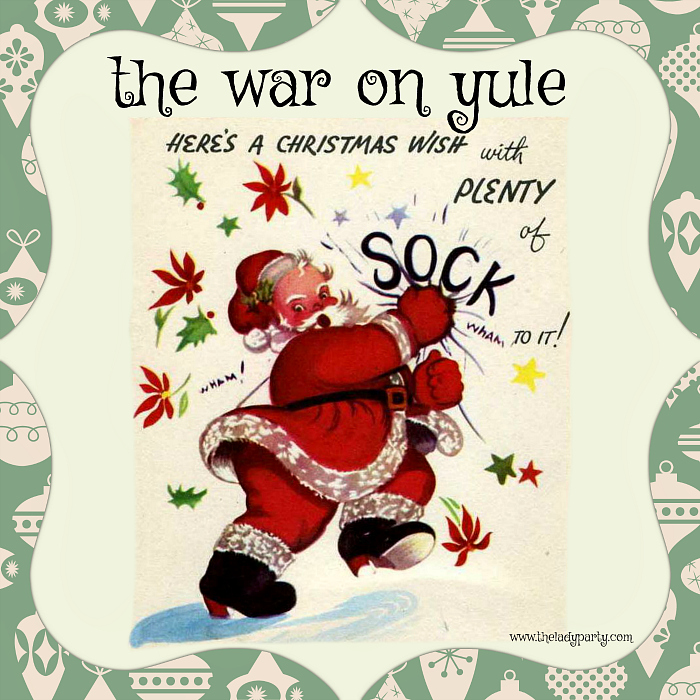 It's time someone pointed it out, and it might as well be me, there has been a war on Christmas for lo these many years. However, it would be more aptly called The War on Yule, or how the Yuletide season was co-opted by Christianity. Shocking, no? Well, not really. It was easier for the church to convert the pagan masses by superimposing official church holidays over existing pagan traditions.

Christmas, as we know it, evolved from a variety of ancient celebrations. Yule was a midwinter festival of the God Odin. The Roman celebration of Saturnalia began on December 17th and continued until the 23rd. There's also Disablot of Scandavian tradition, Yalda of Persian origin, Koliada of the Slavic peoples, and Modranight, or Mother's Night, of the Anglo-Saxon Pagans, which was held on what is now celebrated as Christmas Eve.

Many traditions of these ancient Pagan celebrations were threaded into the Christian celebration of Christmas. After all, you can't convert the heathens without importing their favorite festivities. The Church didn't embrace these holiday traditions initially, but folks liked them so much they weren't willing to let them go. The Christmas tree, mistletoe, holly, caroling, gift giving, feasting, wreaths,  and even Santa and his chimney all have origins in pre-Christian pagan winter festivals.

No one knows the actual date of Christ's birth, but speculation based on biblical evidence is that it falls sometime at the end of September. The church selected December 25th (the date of the winter solstice on the Roman calendar) to coincide with existing holidays that celebrated the return of the light or the birth of the sun after the shortest days of the year.

Santa evolved from the legends of St. Nicholas and older mythical pre-Christian figures like The Yule Goat, Odin, Holda, and Krampus. As Father Christmas, he was a tall, slender, wizardly looking bearded fellow. By the time Clement Moore and Coca-Cola got a hold of him, he morphed into a jolly overweight white bearded man in a red suit with white fur trim.

With all of this in mind, it's clear we have a problem. I think I have a solution.

Christians can keep Christ-Mass or Christmas and the elements of this holiday that belong to their religious traditions. That includes wise men, the virgin birth, the manger, St. Nicholas of Turkey, frankincense, myrrh, and the baby Jesus. There were no actual barnyard animals in the Gospels, but we can toss those in for fun. The rest of us can reclaim the Pagan traditions of decorated pine trees, mistletoe, holly, caroling, gift giving, feasting, wreaths, and Santa whom we shall call Old Man Winter.

As it is 2016, I think we can all agree that ritual sacrifice and naked public singing are best left in the past.

Or, perhaps, we can agree to share these things and refrain from demanding that everyone celebrate the season in the same fashion or for the same reason. The season belongs to everyone, regardless of their religious beliefs or the lack thereof. Long before there was a Jesus, there was a Yuletide season.

As for complaints about the innocuous phrase, "Happy Holidays", there are a variety of holidays that fall during the winter season. Christmas is by far and above the most prominent holiday of the entire year. It starts in July and continues barraging us until December 25th. It is not ignored, shunned, banished, or rejected. If folks wish to acknowledge that there are other things people might opt to celebrate in the winter holiday season by offering a more inclusive greeting, what does it matter?

How could a cheerful exclamation possibly be offensive?

Happy Holidays includes Christmas. There is no war on Christmas and there never has been, folks. That's just propaganda and drivel. There isn't a war on Yule either, I'm just using irony to make a point.

And that's about all I have to say about that.