Wake Up and Smell the Borscht, Folks 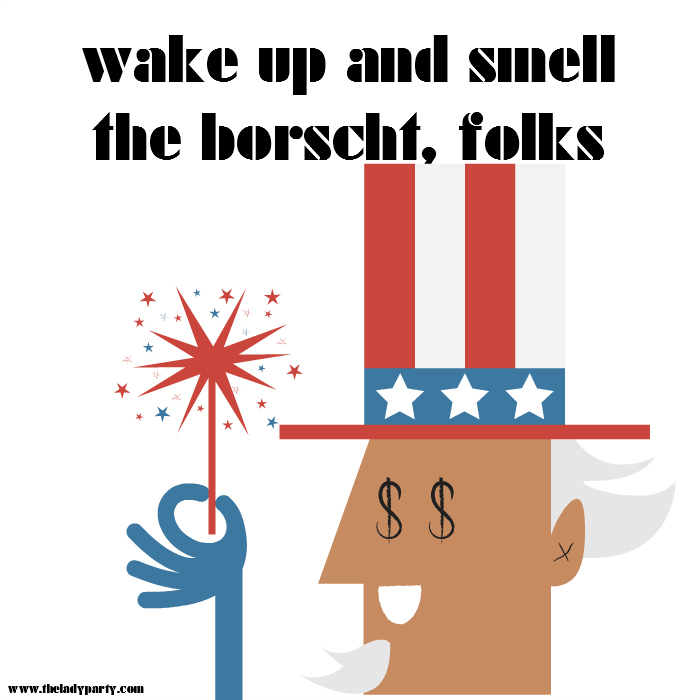 Just when you think it can't possibly get any more surreal, it does. HWMNBP (He Who Must Not Be President) has been filling his cabinet with high rolling campaign donors with deep pockets and shallow pertinent experience. Apparently it's all about pay to play, but unfortunately we'll be the ones paying for the next four years.

Good f*cking grief, Charlie Brown, this shit show hasn't even started and it's already the shittiest show in the history of shit shows.

Speaking of shit shows, Jabba the Tweet is also harboring the delusion that TV is going to be all about him, exclusively . At least that's what he told the New York Times. If that's what's on the schedule, I'm going to be doing a lot of reading.

"You know, I'm, like, a smart person. I don't have to be told the same thing in the same words every single day for the next eight years," HWMNBP said about the daily brief in yet another appearance on Fox "News."

There are no words that fully capture the lunacy of this man, but willfully ignorant twatwaffle comes to mind.

Also, note that he said EIGHT years. Not so fast, Hair Turban.

They have to tell him the same thing in the same words every single day for, like, FOUR years because he refuses to listen. The only thin shred of hope is that if they say it even times he might hear them eventually. But please, don't interrupt him from his busy schedule of tweeting random nonsense and retweeting fake news.

Then there's the big brown bear in the room.

I'm not sure why anyone is surprised that the FBI is claiming a lack of evidence of clear motive on the Russian hacks. They were far more interested in their own attempts to sway the election. I wouldn't be surprised to find out they've been running assist. Heck of a job, Comey. Give our regards to Vlad.

Meanwhile, the GOP has embraced HWMNBP with surprising fervor, considering the smack they were talking during the election. You have to wonder what Putin has on these folks, because regardless of what they claim, Russia sure as shit hacked into the RNC and you know those emails weren't pretty. Has HWMNBP seen them? Are they being used to blackmail these spineless corporate shills?

Is anyone paying attention? Shall we break it down?

HWMNBP owes millions of dollars in debt to Russian banks. This is because he is such a high risk due to his many, many bankruptcies, no US banks will lend him money. But please, tell us what a great business man he is again.

His first campaign manager, Paul Manafort, resigned in August. The FBI has been conducting a query into his questionable business ties to Russia. Manafort brokered business deals for a variety of Russian and Ukrainian oligarchs and served as an adviser to multiple political campaigns in the Ukraine.

But wait, there's so much more!

According to Max Boot in an LA Times Op Ed from July:

Page resigned in the early controversy and intelligence probe over the Russian cyberattacks, Flynn, however, has been tapped as National Security Advisor.

Here's a tidbit from a Yahoo news article written by Michael Isikoff from August, "In a rare public talk this week, former undersecretary of defense for intelligence Mike Vickers said that the Russian cyberattacks constituted meddling in the U.S. election and were “beyond the pale."

In a recent Tweet, his main method of miscommunication, the PE asked why the Russian involvement in the hacking wasn't brought up before the election.

Apparently  he forget the fact that his opponent brought it up in the infamous 'No, you're the puppet' debate exchange, not to mention the warnings from the intelligence community.

HWMNBP's love for Russia goes WAY back to the 1980s. This shit runs deep.

Here's a little quote from HWMNBP's son, Jr.: “Russians make up a pretty disproportionate cross-section of a lot of our assets,” Trump’s son, Donald Jr., told a real estate conference in 2008, according to an account posted on the website of eTurboNews, a trade publication. “We see a lot of money pouring in from Russia.”

The CIA is investigating Russian hacking of emails and their fake news campaign designed to sway the US Election. Here's what HWMNBP tweeted, “Can you imagine if the election results were the opposite and WE tried to play the Russia/CIA card. It would be called conspiracy theory!”

To whom is he referring when he says WE? We, the people? We, his people? It's clear he missed the briefing on the job requirements, because the President represents all Americans.

I seem to recall him saying something about being a 'uniter.' When does that start, exactly?

If he's going to continue to divide us, then let's be clear here, WE're playing the Russian/CIA card, you'd better fucking believe it, Donny Boy.

Here's what the CIA thinks about this latest temper tantrum from The Man with the Golden Toilet:


“It is concerning that intelligence on Russian actions related to the U.S. election is being dismissed out of hand as false or politically partisan. The inclination to ignore such intelligence and impugn the integrity of U.S. intelligence officials is contrary to all that is sacred to national security professionals who work day and night to protect this country,” the official said.

There's a word for what is happening here, and the word is treason. I don't toss that around lightly, but if the fur hat fits...

The rewriting of the truth marches on with this golden nugget of poo:

“I’m not sure [the CIA] put it out. I think the Democrats are putting it out because they suffered one of the greatest defeats in the history of politics in this country,” HWMNBP said on a recent appearance on Faux News.

He lost the popular vote by 2.8 million votes, that's not a great defeat by any stretch of the imagination. This man's ego is almost as big as his hair helmet, and equally as disturbing. He'll do and say anything to keep the conversation focused on him.

This alone makes him dangerous and unfit to serve as president.

And finally, Exxon/Mobil CEO Rex Tillerson has been selected for Secretary of State. Rex is good buddies with Putin, having brokered billions of dollars in oil deals with Russia. In 2014, Putin awarded the ExxonMobil CEO the Order of Friendship, one of the highest honors Russia grants to foreign citizens. It's hard to know if this is a real selection, or a bait and switch to make 'false flag' conspiracy theory loving angry walrus John Bolton look more appealing.

Is anyone sensing a theme-sky here?

Worst of all, Mitch McTurtle knew about the Russian interference and did nothing. Funny that his wife Elaine Chao was appointed  Transportation Secretary. Of course, now Mitch is singing a different tune.

One wonders after the unceremonious departures of Newt and Rudy, if they know something we don't know.

Wake up and smell the Borscht, folks.