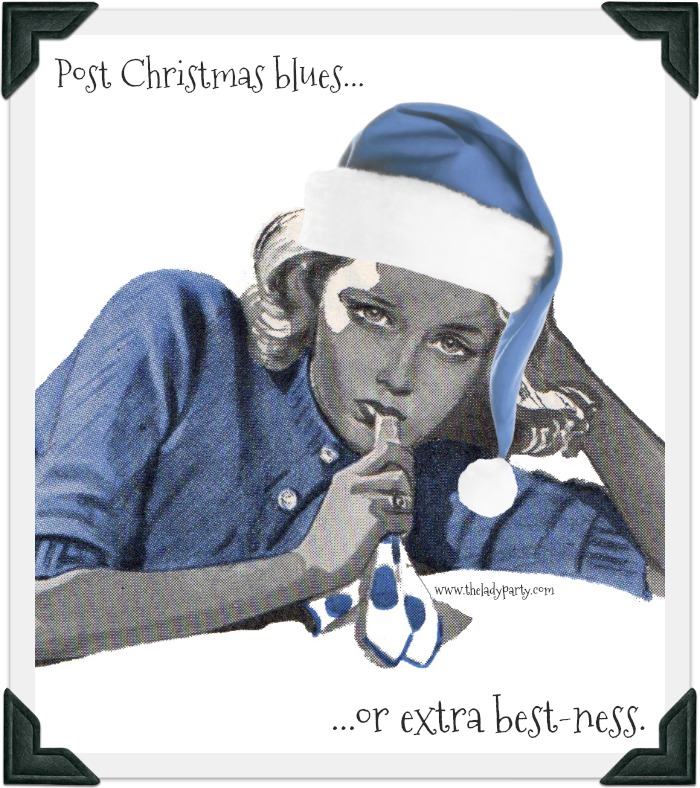 I'm feeling the Post Christmas Blues, but doing my best to keep marching forward. We take Christmas down around here after New Year's Eve. This is mostly because the winter slog that follows is long, extended, and unpopular around these parts. I try to make the most of the holiday season. One year with work travel and other distractions, Christmas stayed up for so long we decided to see how long we could stand it. It finally came down at the end of March, which was not fun in the least. Taking Christmas down in March is accompanied by a potent combination of shame, guilt, and deep sorrow. I do not recommend it. You don't want to leave Christmas up all year long, or the magic gets lost in the mundane. That said, I'm a big fan of fairy lights, which is what Christmas lights become after Christmas...unless they're draped on the outside of your house. Then they become the neighborhood scourge.

"Good grief, Abner, the Potters STILL have their Christmas lights up. Didn't they get the memo? What the hell is wrong with those people?"

The jury's still out on that one.

Christmas and I have a complicated relationship. I avoided confronting the complexities throughout my daughter's childhood. There's a lot of magic to behold in this time of year, and having a child around really helps you see it. It also helps you avoid the less magical parts. She's an adult now and it appears I can no longer bury the complexities under a mountain of glitter. The truth is, I find it bittersweet. I race around like an idiot, handcrafting gifts and treats, mailing out cards, wrapping things up just so...and for the most part the efforts are met with little to no enthusiasm. It's not like I give people things to get prizes...really...but...well...

Oh God, now I'm that person. Somebody shoot me, please.

My husband did make a point of announcing (after I expressed my concern that I wasn't going to get all of the handcrafted ornaments and hand dipped caramel apples finished in time), "No one cares."

I was incredulous in my response, "How can you say that? You're WRONG!"

It's like the time we bought The Secret movie and I posted about it online. Then someone I barely knew messaged me that they were too poor to buy it but would I consider giving it to them because it would mean the world to them to have it. My husband warned me this may not turn out well. I felt like it was a message from the Universe to pay it forward and live in abundance. We shipped it to them. Then they unfriended me and I never heard from them again.

I have to admit that he may be right about what other people think about my gift efforts. He is wrong when he says that no one cares, however. I care, and I will continue to care regardless of what other people do in response. I do need to adjust my level of caring about how much they care, though. I'll own that.

Take this fucking fabulous handcrafted ornament and delicious hand dipped caramel apple and enjoy the hell out of it. Or not, whatever. Merry Christmas, Bitches!

Hey, the Christmas crunch is over, so that's something. There's a fun filled epic family adventure ahead later this week, and that's something else. As for the bittersweet holiday aftertaste, well, that's just part of the deal. The truth is, there are expectations and there is reality and the two rarely meet. Most people are not going to rise to the occasion. Lord knows I don't rise to every occasion and I've most likely let plenty of folks down over the years. We all do our best, it's just some people's best is lacking in best-ness. Those of us with extra best-ness have to make up for it.