You're Doing It Wrong 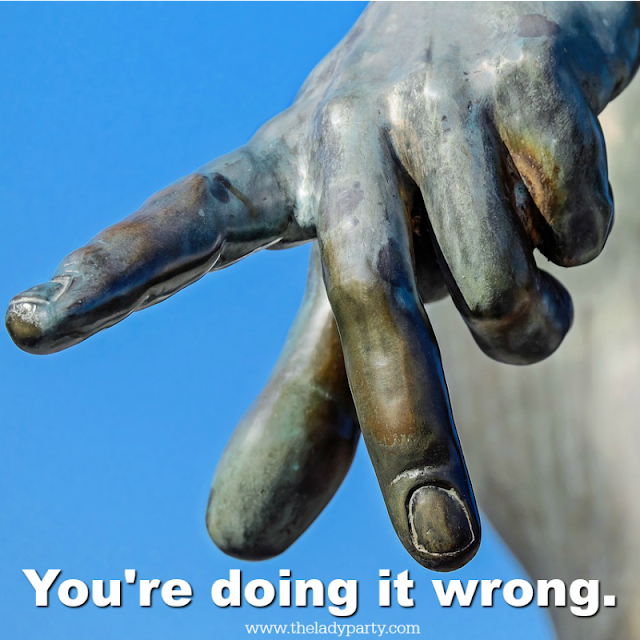 I'm heading into this new week exhausted, but resolute. Already the bickering and finger pointing and bitching about how everyone else is doing it wrong has begun. At a time when we could be uniting, we are dividing further.

I'm not willing to participate in feeding that division.

We have so many voices. That beautiful diversity of views is problematic when you're trying to formulate a path forward. I'm not sure how you find consensus, because the truth is that everyone has an agenda. Plus, social media has diverted our attention away from the bigger picture. This weekend a white male writer decided to go on a rant about safety pins and white people and empty gestures. That viral post spurred a crap ton of vitriol and finger pointing on social media.

Pay no attention to the men behind the curtain, folks. Nothing to see here. Get your knickers in a twist, and argue with people on the internet. You may be right, but while you're busy doing that, the oligarchy is preparing for final takeover. Also pay no attention to the lobbyists and career politicians slithering their way into the White House. The oligarchs may or may not have approved of the candidate, but they are surrounding him with the folks who have their agendas in mind as they prepare to make new laws and repeal existing ones. Our basic freedoms, civil rights, gay rights, women's rights, clean air, clean water, worker's rights, national parks, access to healthcare, and public education are of little consequence unless it serves the big picture. While we were voting for president, they were shoring up their interests. The bottom line is the main agenda. And if you think the sky is falling, you're right. I plan to work on building some shelter from the storm.

I understand the seriousness behind the sentiments disparaging casual participation in symbolic gestures that may not have any real world applications. Some people honestly believe that a single vote followed by a Facebook filter, mini rant, and an angry Tweet is enough of an effort. Some folks want to deny the visceral realities of institutional racism, sexism, and homophobia. Some folks may think wearing a safety pin is enough of a statement.

Putting a filter on your Facebook photo, sharing a hashtag, or wearing a safety pin are not contributing much if you're not willing to get off of your ass and get involved or put your money where your principles are. I get that, but not everyone who is wearing a safety pin is unwilling to walk their talk. Even if they're not willing, at least they're open to the idea. Those who are not willing to walk their talk right now may be more readily inspired to do so by encouragement and mindful discourse than they will be by people determined to pee in their cornflakes.

If it makes you feel better to rant about safety pins and point fingers at other people and their degree of awareness of their selfishness, that's your business. Your argument has merit and you make some valid points. Our personal bias and cognitive dissonance need constant evaluation. We need to talk less and listen more. These are things we all need to deeply consider as we try to figure out what happened and how we can move forward.

We all lost last week and it's going to take all of us working together to fix it. The ideology and policies that he and the people who surround him support affect all of us. They affect the entire planet. If we forget that and break into a shattered bunch of arguing factions busy comparing the seriousness of our level of threat or commitment to the cause, we're all screwed. We can't listen or learn or progress if we keep feeding the divide and conquer narrative.

Let's try to get our shit together, we have a real battle ahead.