This Is Not Normal 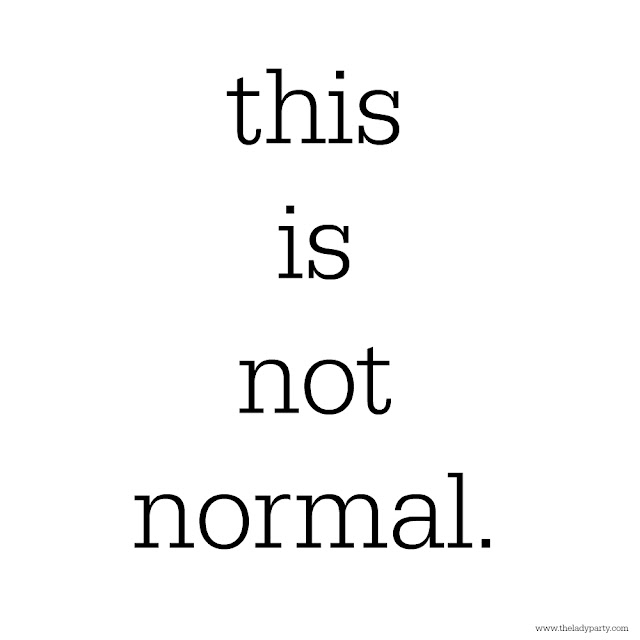 Hello People of the Internets,

I'd like to say I'm feeling better about things, but that would be a lie. I'm feeling exhausted and determined, but not better. I've not been feeling well physically, nor have I been feeling so hot emotionally or intellectually. The three feed into one another, unfortunately. The more I read, dig, explore, listen, ponder, debate, and digest the less well I feel.  The fabric of our society is straining at the seams. Yet, I'm becoming increasingly aware of the fact that it always has been.

"Make the lie big, make it simple, keep saying it, and eventually they will believe it." Adolph Hitler, The Big Lie


The Big Lie never fails. Facts can be bent in all sorts of directions to serve dangerous agendas. As long as the message contains some kernel of truth, it will appeal to people who feel helpless, hopeless, and desperate for someone to come and solve their problems or give them someone or something to blame. How can you fight that monster? With each small capitulation, things that were once unthinkable start to seem reasonable. I don't agree with THAT part of the message, but this part is reasonable so I'm going to go ahead and accept it. This is how it works, folks. It starts with lies. Then there are lists. Then the 'Ministry of Truth' begins to twist minds and hearts through careful and insidious misinformation. And one day you find your neighbors being hauled off to internment camps and you wonder, "Wait, how did that happen?"

Then one day, they come for you.

If you think I'm being alarmist, watch the video. Also, know your history. Finally, don't think it can't happen here...


"Hitler was a powerful and spellbinding speaker who attracted a wide following of Germans desperate for change. He promised the disenchanted a better life and a new and glorious Germany. The Nazis appealed especially to the unemployed, young people, and members of the lower middle class (small store owners, office employees, craftsmen, and farmers).

The party's rise to power was rapid. Before the economic depression struck, the Nazis were practically unknown, winning only 3 percent of the vote to the Reichstag (German parliament) in elections in 1924. In the 1932 elections, the Nazis won 33 percent of the votes, more than any other party. In January 1933 Hitler was appointed chancellor, the head of the German government, and many Germans believed that they had found a savior for their nation." USHMM.com

Please refrain from explaining to me that FDR was responsible for the internment camps. I know this. I do not approve. That is a shameful, inexcusable thing that our government did. It's one of many shameful things that have been done in by our government in this country and abroad.

Also if one believes that people with whom they disagree should 'go back to where they came from', then perhaps they might consider taking their own advice. None of us is from here, originally, unless they're Native American. In further considering the idea of going back to where we came from one wonders what percentage of yourself will be returning to where, exactly?

Remember that those who were not forced to come to this country as slaves (another deeply shameful part of our complicated past), came here without invitation. Immigrants showed up in boats, en masse without visas, and were welcomed to this country and allowed the opportunity to take part in the American dream.


"Often stereotyped and discriminated against, many immigrants suffered verbal and physical abuse because they were "different." While large-scale immigration created many social tensions, it also produced a new vitality in the cities and states in which the immigrants settled. The newcomers helped transform American society and culture, demonstrating that diversity, as well as unity, is a source of national strength." Library of Congress

This is not a drill.


"Adolf Hitler was appointed chancellor of Germany on January 30, 1933, bringing an end to German democracy. Guided by racist and authoritarian ideas, the Nazis abolished basic freedoms and sought to create a "Volk" community. In theory, a "Volk" community united all social classes and regions of Germany behind Hitler. In reality, the Third Reich quickly became a police state, where individuals were subject to arbitrary arrest and imprisonment." USHMM


This is one hell of a shit soup we're brewing up, folks. Pay attention.

I won't stop paying attention because if I become complacent or begin to incrementally accept the unacceptable, then I become part of something I can never condone. That means I may be feeling exhausted and determined for the long haul. So be it.